The racing at the fifth day of inaugural China International Match Race took off in perfect racing conditions. Spectators along the shore of Dishui Lake could follow the matches as the sailors maneuvered right in front of the docks under a sunny Shanghai sky. 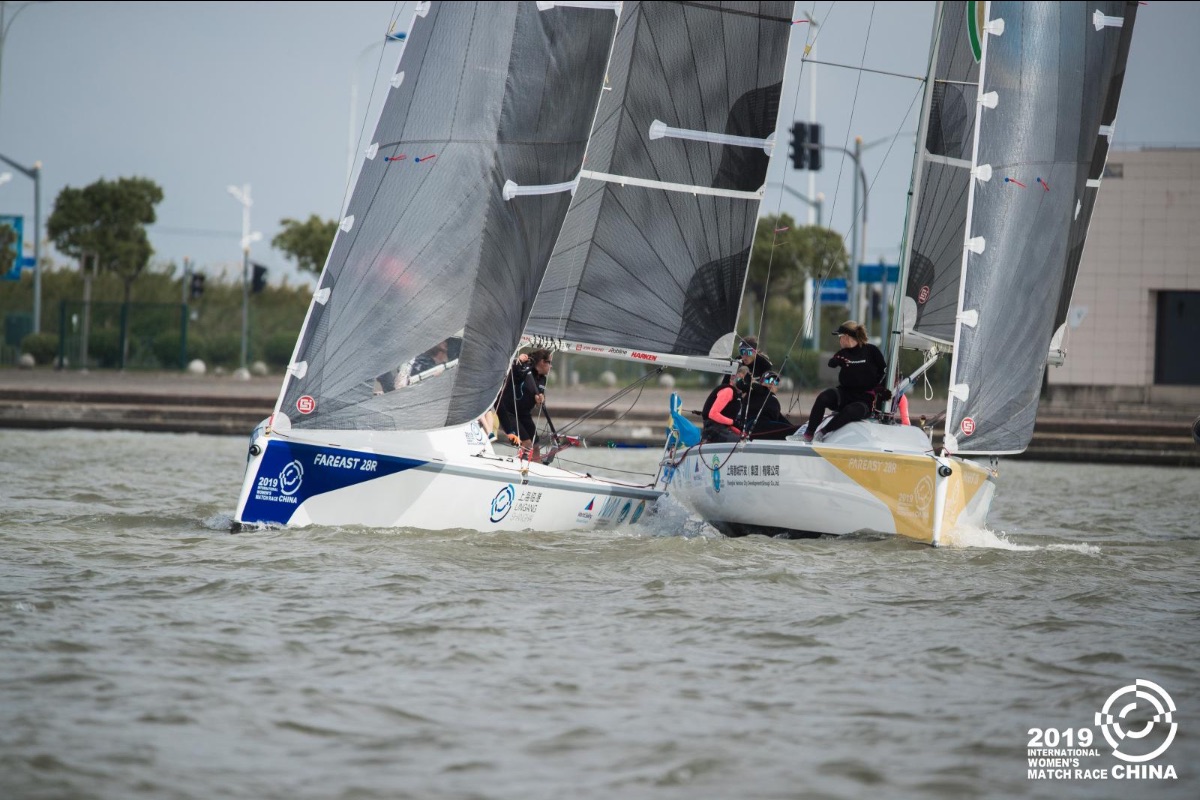 The racing in stellar 12-15 knots of northerly wind offered no big surprises as the number one ranked team in the world won in a convincing manner giving few opportunities for her opponents.

Despite losing to Clare Costanzo’s team in the round robin, Pauline Courtois chose Costanzo’s team as her opponent in the semi-finals during the draw at the morning briefing. This left the Swedes and the New Zealanders to fight in the other semi-final match.

Due to time constraints the semi-finals were shortened to the “best of three” matches and they both turned out to be two quick affairs. The Swedish Team Bergqvist, skippered by Johanna Bergqvist, knocked out the Kiwis, Edge Racing skippered by Celia Willison, 2-0 and in similar fashion the French Match in Pink by Normandy Elite Team skippered by Pauline Courtois defeated Clare Costanzo’s Team Fusion Australia 2-0. The two top-ranked teams invited to the regatta never gave their opponents a chance to pass in the semis.

The afternoon racing was all about the podium places with the petit final first out of the gate. We saw Willison’s New Zealand team win the first race in a comfortable way. But in the second race of the petit final, the Australians were ahead and the match was still on until near the end of the last downwind leg when the Kiwis caught a puff and managed to pass and win by only one boat length to earn the third place step on the podium.

Celia was very happy with her team’s performance and commented:  “We are really happy to come away with 3rd place! Our team’s goal coming into the event was to make the semi finals so to finish 3rd in our 2nd WIM event feels awesome. I’m really proud of how hard the girls have worked this week considering the close competition. It was upsetting to lose to Johanna and her team in the semi final, but her team sailed really well. The girls bounced back like champions to finish in 3rd place. Thanks to all the other teams for the close racing, and thanks to the race officials and volunteers for making it a great event!”

This left the finals and one remaining question -  Could the Swedes, ranked #3 in the world, give the French team who has been sitting at the top of the World ranking since 2018 a run for the top prize money?

In the first two matches of the final we saw the French team sailing with precision and not giving the Swedish team any opportunites to pass. After two losses all pressure was on the Swedish team, they had to win, if not it would be over. In the third pre-start Courtois was in control until the last minute when Bergqvist managed to get out of the French grip and in the same move put a penalty on Courtois. After the intense start with both teams showing their emotions, the match became tight with Bergqvist ahead extending upwind and Courtois closing the gap downwind. But Bergqvist never let Courtois come close enough to offset her penalty. The game was still on!

In the fourth match Team Bergqvist again pushed hard in the pre-start and came off the line at the favored end and with better speed. The French team showed better patience and made the tactical call of the match on the first upwind as they waited for the left shift in the breeze at the top of the course and passed the Swedes. They held on to the finish and took the win.

Again Courtois showed she is #1 in the world and safely sailed into the finish as the winner of the first ever grade one match racing event for women in China and her team takes home the top prize of $10,000 USD and some beautiful necklaces provided by Jenecca Fine Jewelry.

After her loss, Bergqvist had this to say: “We have had a really good time together on the water today but unfortunately we didn’t make it all the way this time. We sailed with confidence in the semifinals and managed to secure our spot in the finals but Pauline was too good today. We still have some lessons to learn before we can beat her. We love the challenge though and are looking forward to racing her again in the future!”

“An amazing day with good and fun matches! It has been intense all day long and we couldn't let up. Every meter was important and we are overjoyed about the way we sailed! We really enjoyed this great event on such nice boats against so many very good teams. We'd like to thank all the teams, but also the efficient race committee, WIMRA and the organizers,” said an elated Pauline Courtois after arriving to the dock after her team’s victory.

With their victory in Shanghai, Match in Pink by Normandy Elite Team secured their third consecutive WIM Series title. They are joined on the 2019 WIM Series podium by Team WINGS skippered by Anna Östling (SWE) in second place and fellow French team Matchmoiselles by Normandy Elite team in third.