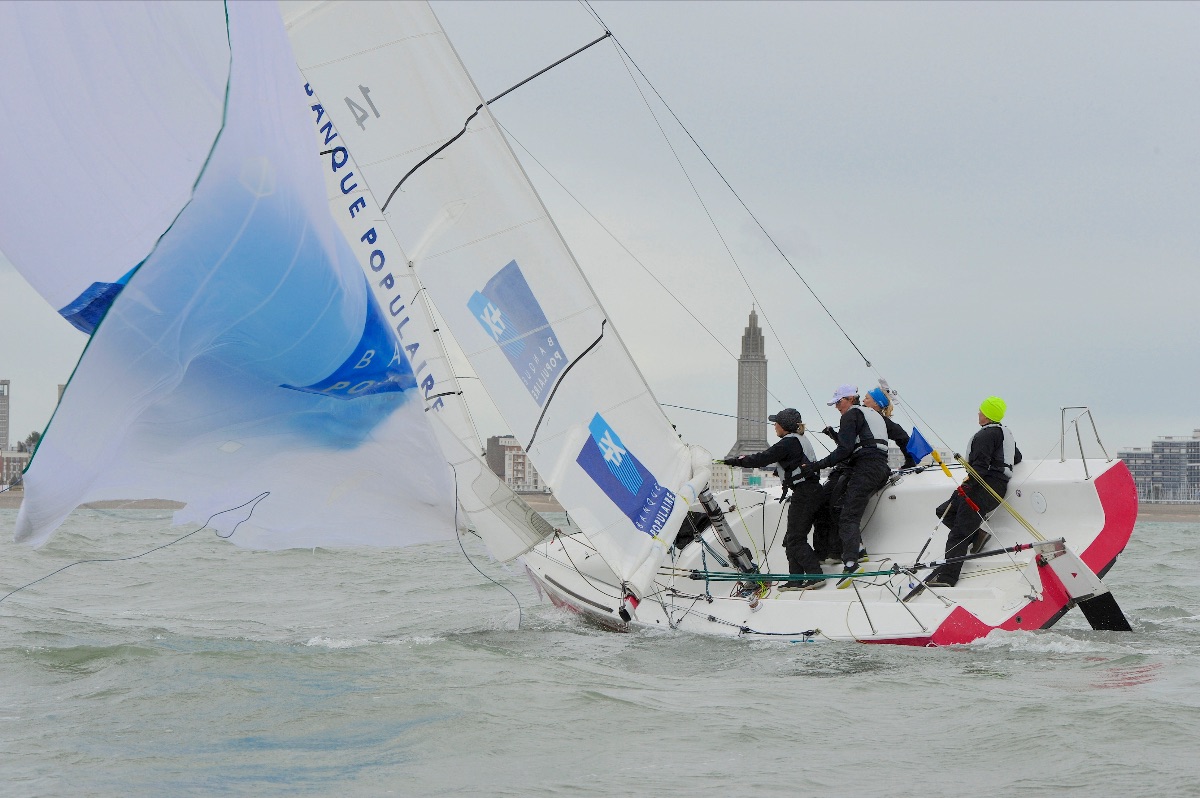 The winds kicked up as racing got underway for day one of Normandie Match Cup – the first event of the 2019 Women’s International Match Racing Series (WIM Series) season in the Le Havre. The veterans lead the way while some of the new teams struggle to find their footing.

The race committee from the Ligue de voile de Normandie, led by Principle Race Officer David Campbell-James (GBR), started the day early and managed to get five flights in before the winds howled at near 30 knots With the forecast indicating that the winds would continue to increase, the fleet was sent ashore until tomorrow.

Local French skipper Pauline Courtois and her Match in Pink by Normandy Elite Team sit atop the standings with three wins and no losses. Also undefeated with two wins and no losses are the L2 Match Racing Team from Finland with skipper Marinella Laaksonen. They both recognize that it is early, but are still comforted with no losses on the water.

Today marked the first day of racing for three skippers debuting on the WIM Series. Marie Björling Duell (SWE) may be new to the WIM Series, but she is no stranger to high-level match racing as she holds six silver medals from the Women’s Match Racing World Championships and sat atop the World Sailing Rankings from 2001 to 2005. “It’s nice to be back. It’s been a good day on the water today. A lot of wind and we had some struggles in the beginning getting the right boat speed, but in the end we had some really nice speed so we’re happy about that. We did some mistakes, but we’re in the mode of learning right now and we’ll learn from them and sail better tomorrow. We also see this event as a learning event for the World Championship in August in Sweden.”

Lea Richter Vogelius (DEN) has been a part of Team Kattnakken for many years but in the role of main trimmer and tactician. Normandie Match Cup marks her surprise debut as a skipper. “This is my first experience as a skipper because Trine (Palludan) very unexpectedly was not able to be here and we only learned that less than a week ago. It’s been okay out there. The conditions have been tough and today was actually my first prestart as a driver in many years! Fortunately the team is the same and the only difference is me on the helm, so it’s only me that has to step up!”

A relative newcomer to match racing, French skipper Chloé Le Bars summed up her first day on the WIM Series: “It’s a new experience for us on the WIM Series and today it was very windy. A good day and we won one flight and it was very good for us. Our team is called the No Name Sailing Team because we are a new team and we have not sailed together before. We look forward to chances to improve.”

Results in the 2019 Normandie Match Cup, the first event of the 2019 WIM Series, after day 1 of the round-robin (skipper, team name, nationality, wins – losses):