The Vitality Roses finished their second game of the Vitality Netball Nations Cup with a 58-54 victory against the South Africa SPAR Proteas.

England started the brighter of the two, going ahead 3-1 in the early stages after strong defensive work and precision shooting from Eleanor Cardwell.

Unfortunately it was short-lived and the SPAR Proteas managed to get the score back level after some excellent defensive rebounds.

The teams traded goal for goal before South Africa found their rhythm, edging out in front by three goals, 11-14.

Both teams made a few uncharacteristic errors towards the end of the quarter which ensured South Africa’s lead stayed at three as the buzzer went, 13-16.

In the break Jess Thirlby made some early changes with Amy Carter coming on at C, Jade Clarke moving to WD and Kate Shimmin on at GD – Laura Malcolm and Fran Williams making way. 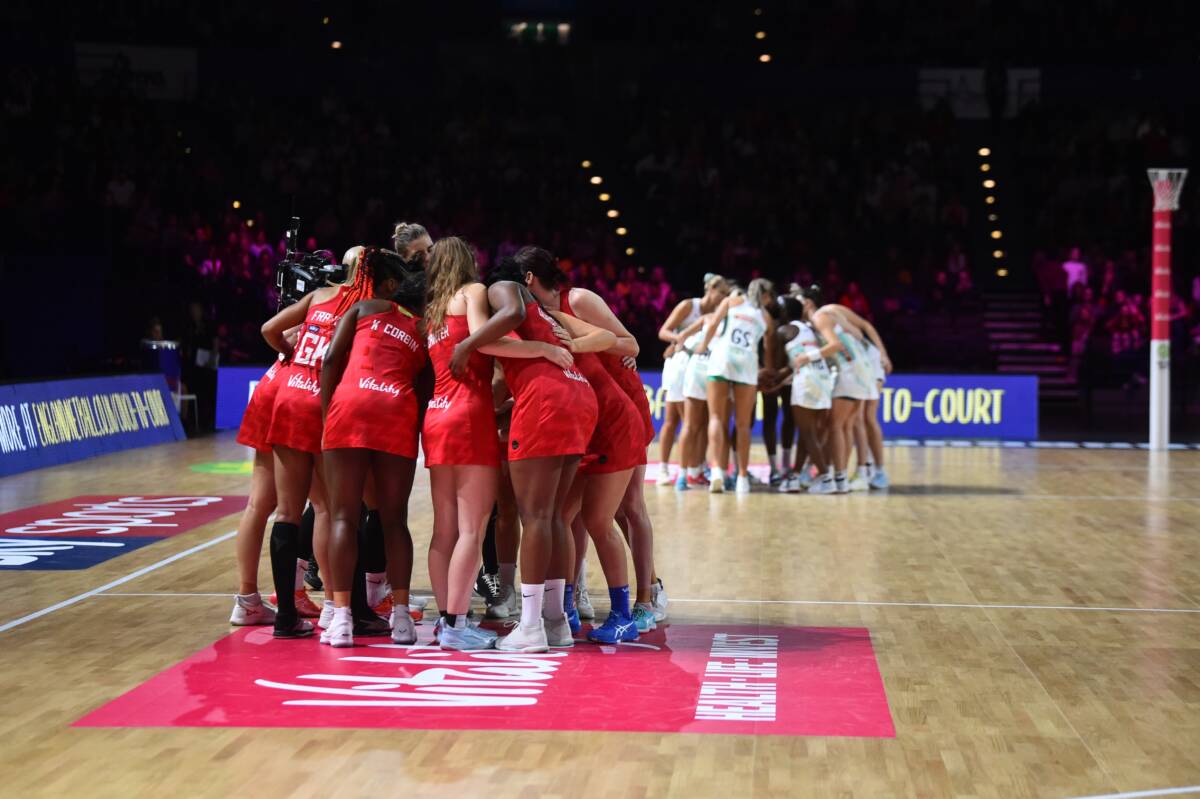 Shimmin made an immediate impression producing an incredible interception which resulted in an England goal. However, the momentum was firmly nestled with South Africa and they manged to extend their lead to four.

Amy Carter was working hard in the centre of the court, on just her second appearance for the Vitality Roses, making some fantastic intercepts. Unfortunately her efforts were wasted with South Africa’s defence standing strong and proving hard to break down.

The crowd started to get behind the Roses and with it they found an extra gear, producing an exciting last few seconds of the quarter, all in England’s favour. Shimmin recording another intercept, Cardwell converting from distance and Stacey Francis pulling off a fantastic intercept which took the score to 25-26 as the half-time buzzer rang.

After the break another round of changes were made by Thirlby with Chelsea Pitman coming on at WA, Malcom back on at WD and Natalie Haythornthwaite moving to GA.

There was an immediate impact and the Vitality Roses found some control. Shimmin and Francis continued to make excellent intercepts and after a run of England goals they built their lead to five, the score now at 34-29.

Both teams were converting in an even measure in the later stages of the quarter and the score finished 42-37.

There was one moment in quarter 4 where South Africa regained their poise and looked like they might get back into the game but Haythornthwaite led from the front with a crucial intercept that turned the tide. The Vitality Roses then held strong and saw the game out, winning 58-54.

A game of two halves with an important third quarter spell for England.