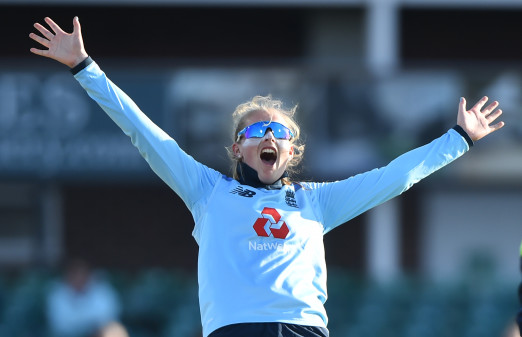 England Women were too powerful for West Indies in the opening match of the Royal London ODI series, winning by 208 runs to make it 11 consecutive all-format wins.

It represents England's joint-fourth best run of victories and a perfect start to the summer. Captain Heather Knight (94) and Player of the Match Amy Jones (91) led the charge with the bat, while Sophie Ecclestone (3-30) was the pick of the bowlers.

West Indies will perhaps be disappointed with their performance in the field but England were ruthless throughout their 50 overs, Jones dispatching a first-ball six over fine-leg and No.11 Ecclestone book-ending England's total with a last-ball maximum over cow corner.

It takes England to 20 points in the ICC Women's Championship table. Wins in the second and third ODI, at Worcester and Essex respectively, would all-but guarantee their qualification for the 2021 ICC Women's World Cup in New Zealand as well as maintaining their impressive winning streak.

"It was a brilliant start from the team. I was really pleased to see us pass 300 again.

“Amy was terrific at the top of the innings, it’s great to see her continue her good form.

“There’s probably a couple of areas we could sharpen up in the field, but Sophie Ecclestone and Laura Marsh were consistently threatening.

“Katherine set the tone up top again and we look forward to taking this performance on to Worcester.”