Julia Engström made a strong start to the season-ending Magical Kenya Ladies Open presented by Safaricom’s M-Pesa, setting the pace with a five under par 67 at Vipingo Ridge on Thursday. 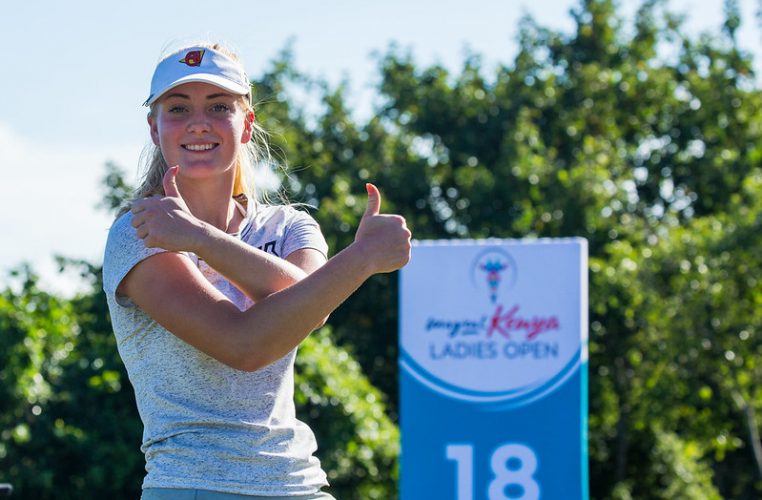 The 18-year-old Swede carded six birdies and a bogey on a sun-kissed opening day to lead by one shot from England’s Liz Young.

Cheyenne Woods from the United States was also in form and fired a two under par 70 to claim outright fifth place.

Engström, the Rookie of the Year last season, birdied the third and fourth holes and cruised to the turn in 34 before adding another gain at the 11th.

She hit a loose drive on the 13th resulting in her sole bogey, but birdied the 14th and 15th to join Young in the lead and then knocked a delightful wedge to within three metres of the target on 18, before making her final birdie putt.

“It was a combination of decent ball-striking and then being good around the greens,” said Engström, who tied for fourth in last week’s Andalucía Costa del Sol Open de España after a career-best round of 65 on Saturday.

“The wind started blowing from the fourth hole as a thunderstorm was coming in close by and we could feel that, but it was nice to have some breeze because it was so hot.

“It’s always nice to have a few good tournaments and after last week, I tried to stay calm and not stress out too much.”

Young, who is in her 11th year on the LET, produced five birdies and one bogey early in the day after a scary start.

She said: “At 5.30am, I walked into the bathroom and there was the biggest huntsman spider in the shower, terrifying me. My roommate (Eleanor Givens) was still asleep so I had to be quiet. She has informed me that it’s gone, but I really hope it’s gone down the drain and not into the bedroom.”

She said that it was so hot and sticky at 7am that she had to change her glove on the driving range, however cloud cover moved in just before midday.

Henseleit, still in the running to end the season as European No 1 with a victory this weekend, also played in the morning, before the wind picked up.

She carded four birdies and a bogey to be six strokes better than the current order of merit leader, Marianne Skarpnord, who opened with a three over par 75 to lie in equal 48th position.

The stakes are equally high for Vayson de Pradenne, who sits in 75th place on the order of merit. She needs a strong finish to move into the top 70 and retain her LET card this week, but is looking at the bigger picture.

The qualified physiotherapist said: “I’m just trying to enjoy myself. I’m already blessed to be here. You look at the scenery around, you look at the sea. Kenya is a fantastic place and I’m just enjoying myself. I’m not thinking about trying to save the card, because I’m 34, I’ve got something going in my life other than golf. I’m golf passionate, but if I have to stop after this week, it’s fine. Of course I will be sad and frustrated, but I know it’s not going to be the end of my life.

“I know I have to do something this week. I met Nicolas Colsaerts in August and he told me how bad his season was and then he won the French Open, so with my coach, we said, you never know, you might do a Colsaerts this week. If I don’t do a Colsaerts I will at least try to play my best golf to try to secure my playing rights for next year.”

Meanwhile a second tournament victory for Woods, the winner of the 2014 Volvik RACV Ladies Masters in Australia, would allow her to re-join the LET next year.