US Name team for the Shebelieves Cup 2020 Russo called into England Squad as Bronze is ruled out
Sailing - 01. December 2018.

Each of the clouds that continually paraded over the Charlotte Amalie harbor on Friday brought with them a different microclimate and meteorological condition. These natural elements tested the tactical skills of the 12 international teams who raced the first full round robin’s flights 12 through 19 on the second day of racing in the 2018 Women’s International Match Racing Series (WIM Series) Finale, hosted at the Carlos Aguilar Match Race (CAMR). For some teams, reading the wind shifts correctly proved advantageous to out-distancing a competitor. French skipper Pauline Courtois did with aplomb, as she and her Match in Pink by Normandy Elite Team of Maëlenn Lemaître, Louise Acker and Sophie Faguet remain undefeated and in the lead. For others, like Swedish skipper Johanna Bergqvist and her Bergqvist Match Racing Team, it meant the chance for a come-from-behind victory.

“In one race today, we were a few boat-lengths behind our competitor. We told ourselves to stay calm and stay close to our opponent because anything can happen. We kept our eyes far out on the water looking for wind and sure enough were able to take the next shift to get ahead and win,” says Bergqvist, who started competing in the WIM Series in 2015, sailed in the 2016 WIM Series Finale at the CAMR and is now racing with crew Isabelle Bergqvist, Beata Törneman, Johanna Thiringer.

Bergqvist and her team are currently second overall behind France’s Courtois with seven wins and only one loss to the Netherland’s Renee Groeneveld’s Dutch Match Racing Team.

“We’re looking forward to finishing the round robin and take it from there as to what teams we’ll be facing hopefully in the semi-finals,” says Bergqvist.

Another team with a come-from-behind victory today was French skipper Margot Riou and her APCC Women Sailing Team.

“We sailed eight matches total by early this afternoon and won five,” says Riou, who earned a silver medal at the 2017 French Women’s Match Racing Championship and for this event is sailing with crew Clémentine Hilaire, Caroline Vandame, Laurane Mettraux. In one of those this morning, we were behind. Then, we were able to put a penalty on our opponent (Great Britain and Athena Racing skipper Octavia Owen). In the time it took her to do her penalty turn, we found just enough breeze to move ahead and win. That’s what we like about match racing, and especially at this event. The racing is very close and exciting.”

It’s the never-know-what-will-happen excitement of the shifting winds that Owen enjoys.

“Sailing can be very difficult when its very light and challenging too when its too heavy. What I like here is that you are never stuck in one condition. There is a lot of wind channeling here and finding those channels is a challenge and a reward. As a result, our game plan is to keep it simple, to not overthink and to take each race anew and on its own,” says Owen, who won a silver medal at the then-ISAF Under 19 Team Racing World Championship at age 15, made her debut in the WIM Series in 2017 and in this event is sailing with crew Ruby Riggs, Amber Riggs and Hebe Hemming.

Looking ahead to Saturday, it is Courtois, Bergqvist, Sweden’s Anna Ostling and France’s Margot Vennin, who are strong contenders to move into the quarter finals of the 2018 WIM Series Finale at the Carlos Aguilar Match Race.

Vennin, skipper of the Matchmoiselles by Normandy Elite Team, and her team of Marie Zugolaro, Juliette Dubreuil and Sophonie Affagard proved quick studies on the harbor’s wind conditions and this has contributed to their high standings.

“We began the first day of racing against two teams we never sailed against, the USA’s Morgan Collins and Sweden’s Helena Nielsen, and won. Then our third race was against Octavia and we won that too. We were happy with that result and became more comfortable in the next matches. I think our success is reading the puffs correctly at the start, good speed off the line and good team work throughout the match,” says Vennin, an engineering student from Paris who achieved a top ten finish at the 420 World Championships, began match racing in 2016 and has raced in all five of the 2018 WIM Series events.

Match racing is sailed in two identical boats around a short course, providing fast action close to the crowds on shore. The intense racing is just as exciting for the spectators as it is strategically, tactically and physically challenging for the competing crews.

The CAMR is a World Sailing (WS)-provisional Grade One event. The format will feature a full round robin of all teams followed by knockout quarterfinals for the top 8, then knockout semi-finals, petit-finals and finals. Racing continues Friday at 9 a.m. local time.

Known internationally for introducing young sailors to the sport, CAMR organizers work cooperatively with the V.I. government and V.I. Department of Tourism in its efforts to get more of the island’s youth out on the water. As such the event hosts the CAMR Youth Regatta, which takes place on Saturday starting at 11:30 a.m. Members of the Boys & Girls Club of St. Thomas, who have also been enrolled in the Marine Vocational Program, will crew for the women match race skippers in a best of three fleet race.

Standings after 19 Flights (of 22) in the Round Robin
(Skipper, Team Name, Country, Wins-Losses): 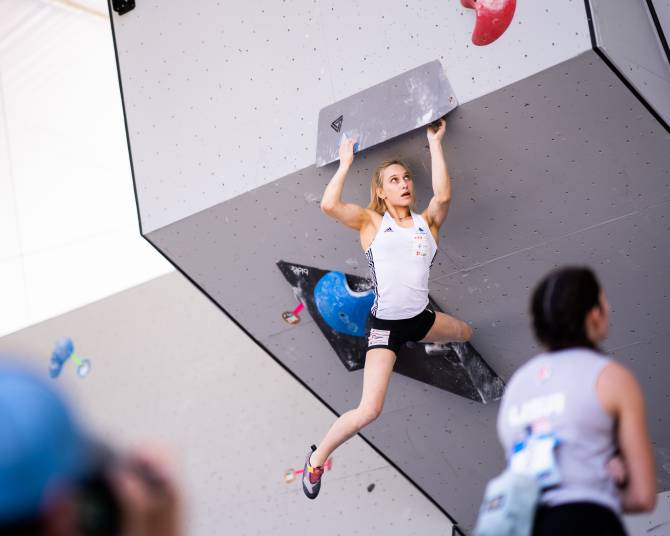