Dalilah Muhammad's world 400m hurdles record of 52.16 and Yaroslava Mahuchikh's world U20 high jump records of 2.02m and 2.04m, all set at the World Athletics Championships Doha 2019, have now been ratified, along with Joshua Cheptegei's world 10km record of 26:38* and Edward Cheserek's 5km world record-equalling run of 13:29.

Muhammad, the Olympic champion, broke the 400m hurdles world record twice in 2019, but it was her second, on 4 October which propelled her to her first world title, that will prove most memorable. 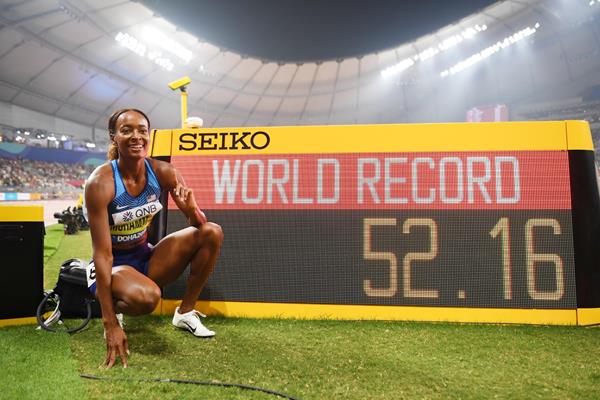 In one of the most eagerly anticipated match-ups of the 2019 World Championships, Muhammad faced Diamond League champion Sydney McLaughlin in a race that didn't disappoint. Both went out hard, running virtually even after the first 200 metres. Muhammad built a narrow lead midway through the final bend to enter the final straight with a two-metre lead.

McLaughlin fought back but Muhammad held her off in the waning stages to shave a further 0.04 seconds from the mark she set at the US Championships on 28 July. Muhammad's performance earned her a US$100,000 bonus as part of the world record programme supported by QNB. She was later named World Athlete of the Year.

The women's high jump in Doha was nearly as dramatic as Mahuchikh twice broke the world U20 record with leaps of 2.02m and 2.04m on 30 September to take surprise silver behind defending champion Mariya Lasitskene. With her stellar performance, Mahuchikh bettered the previous world U20 mark of 2.01m held by USSR’s Olga Turchak and Germany’s Heike Balck from 1986 and 1989 respectively. The rising Ukrainian star also became the youngest ever World Athletics Championships field event medallist.