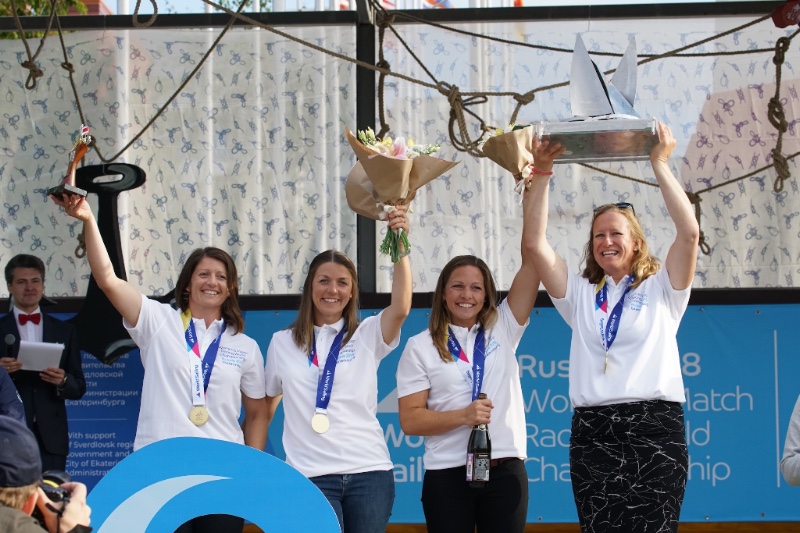 The teams of Trine Palludan and Alexa Bezel each had the night to come up with a plan to come back from 0 – 2 deficits in their respective Semi Final matches. They arrived at the yacht club with the intention of winning their matches and advancing to the Finals. Alas, Pauline Courtois’ and Lucy Macgregor’s teams had plans for a different outcome.

Courtois’ Match in Pink by Normandy Elite Team won the start over Palludan’s Team Kattnakken and was able to maintain control and stay ahead to the finish to win 3 – 0 and advance to the Finals.

In the other Semi Final match Bezel’s Swiss Match Racing Team “kept it close, but not close enough” Bezel explained, thus paving the way for Macgregor’s Team Mac to also advance to the Finals with a 3 – 0 record.

The Finals were a battle of two teams that came into the Finals with an incredible combined score of 31 wins and only one loss (by Courtois to Macgregor in the first round robin).

When asked to describe the day, Team Mac’s Annie Lush replied “the day was very tricky as we saw winds from 3 to 15 knots in just one race with really big shifts!” Team Mac played those shifts well and took an early 1 – 0 lead in the Finals.

As expected, the pre-starts were very aggressive as both teams jockeyed for control of their opponent. The second match was the most aggressive as Macgregor received a red-flag penalty at the start and still managed to catch and pass Courtois on the downwind leg. “I must say that was our best run of the regatta. We gybed six or seven times and played the shifts perfectly” said Macgregor in describing their come from behind victory.

With their backs against the wall down 0 – 2, it was must win time for Courtois’ team. But Macgregor took early control of the third match with good speed and led from start to finish to win the World Championship.

“We were not fast today. We felt stuck in the water. Not our best day” conceded Maëlenn Lemaitre, Match in Pink’s tactician, in describing their defeat. She went on to say “We will train hard and believe in our talent and come back strong for our next event.”

Team Mac, incredibly, went undefeated through the whole regatta to win their third World Championship and Lucy gave much credit to her crew: “Annie, Nicky and Kate did a fantastic job all week. And it is great to have this win together.”

With this year’s win, Annie Lush becomes tied with Dorte Jensen (Denmark) as the most decorated sailor in Women’s Match Racing World Championship history with four titles. Lush was part of Sally Barkow’s winning crew in 2004 and 2005 and won together with skipper Lucy Macgregor in 2010 and, of course, again this year.

The following awards were presented:

The first-placed team following the round robin was presented with the ISAF / World Sailing Nucci Novi Ceppellini Memorial Trophy. The trophy is named after Nucci Novi Ceppellini, ISAF Vice-President from 1998-2008, who passed away in February 2008 after many years dedicated to the sport, with women's match racing one of her particular passions.

Results in the Final:

Results in the Petit Final:

Results in the Semi-Finals: