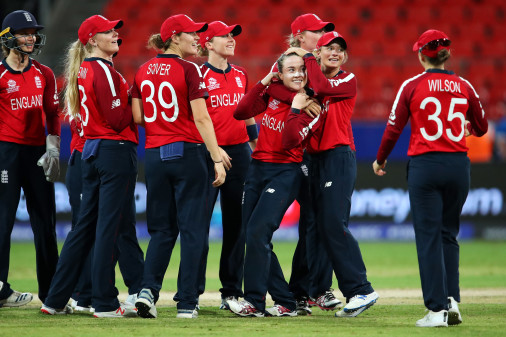 All-rounder Sciver picked up from where she left off to score her third half-century of the tournament, helping England to post 143 for five on a tricky track.

West Indies’ response never got going with Lee-Ann Kirby top-scoring with 20 at the Sydney Showground.

That was largely thanks to the spin trio of Sophie Ecclestone (three for seven), Sarah Glenn (two for 16) and Mady Villiers (one for 30), helping dismiss West Indies for 97 to win by 46 runs.

England started afresh with Tammy Beaumont joining Danni Wyatt atop the order but the move didn’t work out, the new opener trapped lbw by Shakera Selman in the first over.

Wyatt then fell to a superb catch in the deep from Hayley Matthews off Anisa Mohammed but in Sciver and captain Heather Knight, England had the best duo for the rebuild job.

With more than 70 per cent of their team’s runs in the tournament, the importance of Knight and Sciver is not lost with the latter reaching her third half-century in four games in this Women’s T20 World Cup.

By then Knight (17) was run out brilliantly by Selman and Fran Wilson had holed out to Britney Cooper at deep midwicket off Afy Fletcher, with England 102 for four with four overs remaining.

Amy Jones, in a new role at No.6, found back-to-back off-side boundaries off Stafanie Taylor but had to watch Sciver finally depart for 57 in the same over to take her tournament tally to 202 runs in four matches.

Just six balls remained as Brunt joined Jones in the middle, the bowler striking boundaries from the last two balls of the innings to take England to 143 for five.

West Indies also tinkered with their top order as Deandra Dottin opened up, but her innings ended on just nine with Ecclestone having her snaffled by short midwicket.

Taylor struck two boundaries off Brunt to end the Powerplay but that was to be her last significant contribution, stretchered off in the eighth over and retiring hurt from the innings.

From there England seized the impetus as star leg-spinner Glenn got into her work, bowling Hayley Matthews with her eighth ball to leave West Indies two down in the ninth over.

It was to get even better for the spin unit, off-spinner Villiers marking her first Women’s T20 World Cup over with a wicket maiden after taking a smart return catch off Shemaine Campbelle.

At 42 for three come halfway, West Indies had work to do with 102 still required and their task was tougher still when Chedean Nation edged Glenn to wicket-keeper Jones without scoring.

Lee-Ann Kirby (20) did her best to inject some momentum with towering sixes off Glenn and Villiers but Anya Shrubsole ended her exploits when the big-hitter was held by Sciver at long-on.

England boast the best economy rate for spinners in the Women’s T20 World Cup 2020 and with each of Ecclestone, Glenn and Villiers bowling a maiden, they weren’t letting up.

Ecclestone, who has now taken wickets in her last 18 T20I matches, had Britney Cooper stumped while Villiers completed back-to-back run-outs of Afy Fletcher and Aaliyah Alleyne.

Ecclestone then had the last say, taking her 100thÂ international wicket by bowling Anisa Mohammed to send England into the last four.