Knight And Glenn Take England To Victory Over Pakistan

A half-century from Heather Knight and three wickets from Sarah Glenn took England to a comfortable victory over Pakistan in the ICC Women's T20 World Cup. 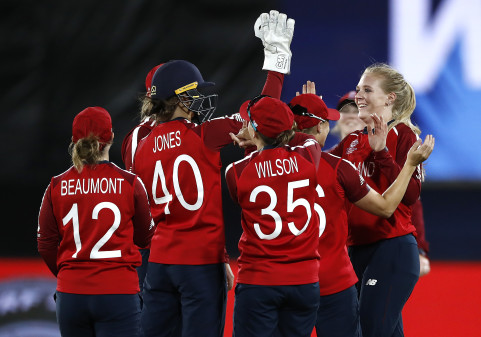 Knight continued her remarkable form in Canberra, scoring 62 to add anotherÂ half-century to her last four innings in the Australian capital, which now include three half-centuries and a hundred.

Defending 158, England's bowlers combined effectively but it was the spin duo of Sophie Ecclestone and - in particular - Sarah Glenn who most impressed.Â Glenn took 3/15 from her four overs to continue her good start to international cricket.

England travel to Sydney to take on West Indies on Sunday, chasing a win to qualify for the semi-finals.

Sarah Glenn:Â "I was really happy to get three wickets. I've learned a lot in Australia about bowling wicket to wicket and not giving any width and it worked well for me tonight.

"The wicket was quite slow so it wasn't easy to score and with the total we had set we knew a good start with the ball would make it quite hard work for their batters.

"We've got a big game against West Indies on Sunday, hopefully we can keep up our form from the last two games and make it through to the semi-finals."