An improved effort from the Silver Ferns was not enough to deny Australia a 56-47 win in the second Constellation Cup test played in front of a sold-out crowd in Townsville on Wednesday. 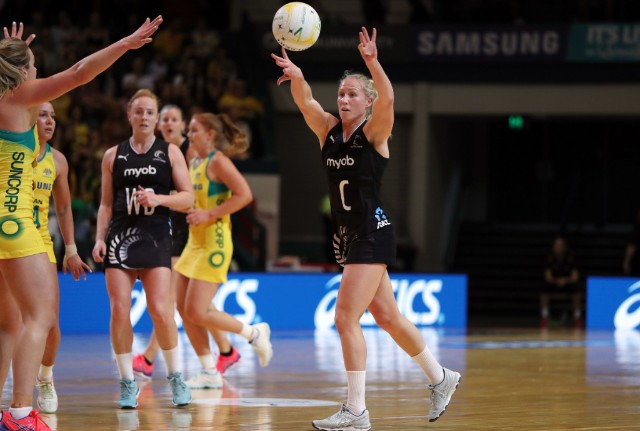 The result narrowed the 15 goal loss from Sunday’s opening Test but there was no fairy tale win for inspiring Silver Ferns captain Laura Langman, who in her 146th test became the Silver Ferns most capped player.

However, under new coach Noeline Taurua, the signs from the Silver Ferns in the second outing were promising. Retaining their most experienced seven for the entire match, the Silver Ferns showed plenty of fighting spirit to work their way back into the contest on several occasions.

A stirring final quarter surge from Australia after they were pushed all the way proved the difference.

The series now heads to New Zealand where matches will be played in Hamilton on Sunday, and Wellington next Thursday.

After producing a strong finish from goal shoot in the opening Test, Maria Folau was handed the starting bib in that position for the second Test where she paired with Te Paea Selby-Rickit under the hoop while Samantha Sinclair got the nod at wing defence.

Australia made a couple of changes to their starting line-up with rookie Kelsey Browne coming in at wing attack and the tall figure of April Brandley lining up at wing defence.

The Silver Ferns successfully defused a slow start after falling to an early 0-6 deficit, the visitors producing a stellar fightback to even the possession stakes and edge their way back into contention. Showing great patience, opportunities opened up for the Silver Ferns on attack while staunch defence at times rattled the Australians.

The Diamonds kept the fast-finishing Silver Ferns at bay to hold a slim 12-11 lead at the first break.

From a goal-for-goal start to the second stanza, Australia clicked up a gear, showing their ability to score quickly through slick and accurate transition play.

The Silver Ferns were quick to respond, denying Australia’s intentions of taking control after they had burst out to a six-goal margin. Captain Caitlin Bassett was an influential presence under the Australian hoop but the Silver Ferns applied plenty of disruptive defensive pressure through Jane Watson, Katrina Grant and Sinclair.

Folau found her groove in the shooting circle while Langman was in the thick of action at both ends of the court but Australia held the edge when leading 29-24 at the main break.

The intensity levels rose a notch during the third term, the Silver Ferns decision to remain with their starting seven paying dividends during a combative and lively 15 minutes.

Australia introduced goal attack Gretel Tippett and Gabi Simpson at wing defence, but it was the Silver Ferns providing the challenge. Continuing her recent top form, Watson was an influential presence in shutting down Bassett’s shooting options while reeling in a succession of turnover ball.

She was well-supported by Langman and Folau as the Silver Ferns trimmed Australia’s lead to 41-37 at the last break.

The Silver Ferns gamely clawed the margin back to one in the run home but were unable to contain the fast-charging Diamonds.