GEORGIA HEFFERNAN RULED OUT FOR SEASON MAGIC AND STARS PLAY OUT FIRST EVER DRAW
Hockey - 23. November 2018.

The Netherlands booked their place in the final with a game in hand after they beat the world number two side and Olympic champions Great Britain on the fourth day of the Wanglibao Hockey Champions Trophy Changzhou Wujin.Â 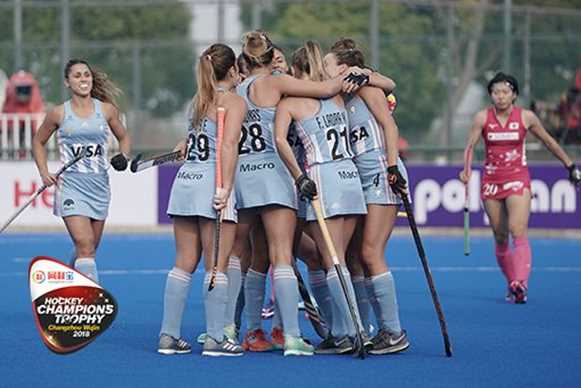 Australia and China remain in contention for a place in the final after they played out a goalless draw.Â

There was a glint in captain Delfina Merino's eye as she said: "Today is the day, I can feel it." The Argentina captain's words proved prescient as the world number four team finally found their form and scored four goals in a rout that left Japan on the bottom of the table and moved Argentina into fourth position and still in contention for the bronze medal match on Sunday 26 November.Â

The first few minutes were evenly matched. Japan, on a good day, are fast and unpredictable with their movement and passing and so it was for the opening few salvos of this match.Â

In defence, Hazuki Nagai was a rock, reading the game well and distributing cleanly to her midfield. Energetic as ever, Yu Asai and Minami Shimizu were causing problems for the Argentina midfield and the forwards were picking up on any loose balls and challenging Belen Succi in the Argentina goal.Â

The tide turned in the 19th minute when Argentina won a penalty corner after a wave of attacking pressure on the Japanese goal. The initial shot rebounded and fell to Eugenia Trinchinetti, who whirled round, shot and scored.Â

Seconds later Maria Granatto seemed about to make it 2-0, but she looked for the spectacular finish as she latched onto a pass and her shot sailed high over both Megumi Kageyama's head and the goal.Â

The second goal followed shortly when Julia Gomes crossed into the circle and Julieta Jankunas was on hand to guide the ball home.Â

The second half saw Japan start brightly again but ten minutes into the half, Argentina won a penalty corner and Agustina Gorzelaney was on hand to strike home for her first goal for the senior team.

The fourth goal was a rocket of penalty corner from Jankunas. Her shot flew into the top right-hand corner of Megumi Kageyama in the Japanese goal to give her team an unassailable lead.Â

"We did not come here to just get an 'experience' said goalkeeper Kageyama. "We are here to compete at this level." The 'keeper, who has enjoyed an impressive tournament, said her team would be looking for the win in their next game [against Australia on 25 November].Â

"One of the things we have really picked up on is the speed that some of the teams attack along the baseline. We will be working on that and also on defensive penalty corners."Â

For Merino, the match was a chance for the new-look Argentina side to re-group and re-set their goals.Â

"Sure, it has been frustrating but we still have a chance to bring a medal home to Argentina and that will be our new goal. Our motivation to win when wearing the Leonas shirt is huge, so we will be going flat-out to win bronze."Â

There was a distinctly nervous edge to Australia as they stepped out onto the pitch against the host nation China. A win for the Hockeyroos would see them book a place in Sunday's final. A win for China and it would all go down to the wire and the final round robin matches to see who would join Netherlands in the finals.Â

China have been impressive throughout the competition and the first half was a fine example of how they have developed an attacking flair to complement their defensive capabilities.Â

Marshalled from the back by the excellent Cui Qiuxia, the China team poured forwards and put the Australian team under wave after wave of pressure.Â

Australia created their own chances but Ye Jiao in the China goal has been on good form and gave little chance to the forwards in gold and green to maximise their opportunities.Â

It was China who looked closest to breaking the deadlock. As the first half counted down, Llang Meiyu came close on two occasions, narrowly missing out on a cross that had evaded Ashlee Wells in the Australia goal and then a second attempt just flying past the post. Also busy in the attacking circle was captain Peng Yang, whose darting movements were creating confusion in the defence.Â

The best chance came with seconds until the half-time whistle. Cui Qiuxia had moved out of her central position and drove down the right. Her cross found Liang Meiyu but the forward was thwarted by a great save from Wells.Â

The second half continued in the same vein. China were under the cosh for much of the half as Australia poured forwards. Stephanie Kershaw fired in a cross that Rebecca Greiner deflected over the crossbar; Emily Smith just missed out as she dived onto a loose ball in front of the goal and Jodie Kenny was denied any joy on her penalty corner attempts.Â

The tough and uncompromising Chinese defence weathered these storms and many more and, in response, created their own chances.Â

The best chance occurred when Zhang Xiaoxue drove out of defence and found Zhong Mengling high up the pitch. The crowd held their collective breath as the forward gathered the ball, but the movement of Australian 'keeper Rachael Lynch was enough to force the player to shoot wide.Â

Speaking after the game, Karri McMahon said: "We knew it was going to be like this against China. We created the chances but their defence is always solid and we just couldn't find a way through. We are doing all the right things in defence and attack but the final bit hasn't clicked yet – hopefully, it will all come together in our last two games. This is our last event of the year and we want to go out on a high."Â

The Netherlands continued to show their class as they tore into a Great Britain side that looked shell-shocked for the first quarter of the game.Â

The opening goal was scored after Margot van Geffen drove into the circle and drew goalkeeper Amy Tennant off her line. The ball bounced around between Ginella Zerbo and Marijn Veen and it was Veen who finally managed to push it home: the goal moves the 19-year-old to the top of the competition's goal scorers, ahead of team mate Caia van Maasakker.Â

A sumptuous move saw Laurien Leurink gain possession just ahead of her own 23 metre area. She played a perfectly-weighted ball to Margot Zuidhof, who was waiting high up the pitch, but the striker was unable to slip it past Tennant.Â

Zuidof made no mistake however with the second goal. The ball was played into the circle by van Geffen, who was causing all sorts of problems for the Great Britain defence. Zuidof was on hand to slip the ball into the goal and double her team's lead.Â

After half-time it continued to be one-way traffic. Over the course of the event, the Netherlands have sometimes not looked their best but against the world number two side they lifted their game to the next level.Â

It was a point emphasised by van Geffen: "We certainly played better than in earlier games but we still have some areas to improve. But our passing and movement was good."Â

Ginella Zerbo scored the third. She received the ball at the top of the circle and switched to her reverse. The ball flew sweetly into the net and Great Britain were left scratching their heads on how to deal with this orange wave of pressure.

The fourth goal was scored by Zuidof, again, a result of good build-up play, which created space among the Great Britain defence.

It was not all bad news for Great Britain. As midfielder Sarah Jones said: "We had passages of good play, where we really followed our game plan. But we are a new squad and we are learning all the time. These are a great group of players and we are all working together to create something very special. We have our values and that keeps us together and moving forwards."Â

"I am learning every day," said Marijn Veen after the game. "The more experienced players are helping and it is so exciting to be around this squad."