Lauren Stephenson from South Carolina carded a six-under 66 to lead after the first round of the Australian Ladies Classic Bonville. 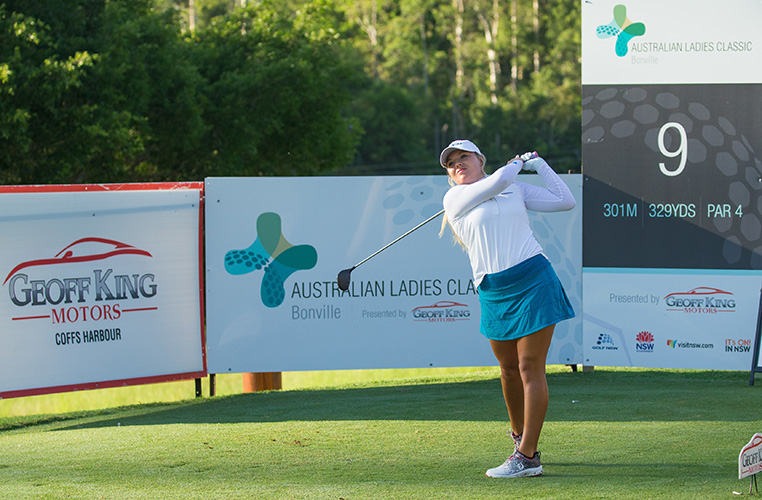 Stephenson teed off from the ninth hole and began her round with a fast start, carding birdies on four of her first six holes. The second-year LPGA player added three more birdies against one bogey.

“It was a great day. I had seven birdies and one bogey, where I missed a short putt. I made a lot of good putts on the other holes so I couldn’t be too upset about it,” Stephenson said of her round.

“The first nine holes are really scoreable so it’s important to get off to a great start. I made a birdie on my second hole and then just continued that and had three birdies in a row.

“The back nine was really important and it was great to go into the harder holes knowing that I had already had a couple of birdies.”

Stephenson spent last season as a rookie on the LPGA Tour. In 20 starts, the University of Alabama product made 11 cuts and produced one top-10, which was a tie for eighth in her first tournament, the ISPS Handa Vic Open in Australia. She ended the season ranked 85th on the Race to CME Globe.

She said: “I love Australia. I’m super happy to be here for a month. I think I would move here if I didn’t live in the United States. The people are so nice and the golf is so fun. This course is extremely different to what we played the last two weeks in the Vic and Australian Opens, but this course is amazing. It’s nice to play something that’s more familiar to me, because my courses at home have a lot of grain and are similar to this style. I feel at home.”

Dryburgh, who is no stranger to golf in Australia, also started on the ninth hole and tallied six birdies and one bogey, crediting a hot putter as the key to her success.

She said: “Everything was pretty good today. This is my third time back in Bonville and I’ve been in Australia for six weeks now, so I’m loving life out here and the heat is much better than the weather at home. There were six birdies and one bogey, so I was rolling it well with the putter.”

Min A Yoon, making the third start of her professional career, had a solid, bogey-free round. The ALPG Tour rookie commented: “This is my third year of coming to play in Australia. I came here for two years as an amateur and now I have a different mindset as a pro.”

Komulainen started from the first hole and went out in 33, two-under-par, before coming back in three-under 34.

She said: “That was my first round of the season, so I’m happy to start like this. I hit the ball really well and had a lot of birdie chances. I like the course. It’s beautiful and it’s always nice to be here.”

Both Lee and Cho, the top ranked player in the field at 35th on the Rolex Women’s World Golf Rankings, finished well with four birdies on the back nine to get within one of the lead.

Meanwhile Western Australian Gill, who has won three titles on the ALPG Tour, said that she was playing aggressively from the word ‘go’.

Sweden’s Lina Boqvist and Ireland’s Leona Maguire are tied for eighth place on four-under-par, with a further seven players tied for tenth.

The defending champion Marianne Skarpnord opened with a level par round of 72 to sit in a share of 38th place.