Azahara Muñoz and Madelene Sagstrom carded a pair of five-under-par 66s in warm and sunny conditions on the Chateaux Course at Golf du MĂŠdoc near Bordeaux on Thursday to set the clubhouse lead in the Lacoste Ladies Open de France. 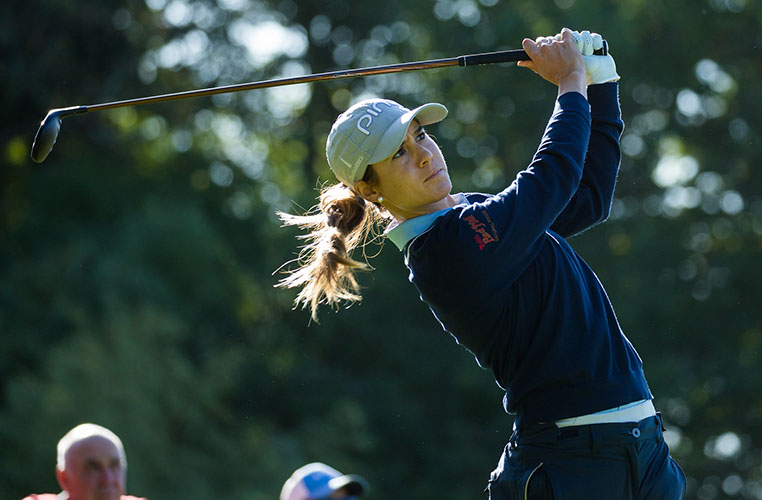 Muñoz, a star of Europe’s victorious Solheim Cup team at Gleneagles last week, made six birdies and dropped only one shot at the 13th to put herself in position to earn the title for the third time, having tasted success in the event when it was played at Chantaco in 2013 and 2014.

“I was really tired on Monday and Tuesday, but I was pretty smart and took it easy on Tuesday. I only practised for an hour to an hour-and-a-half, that was it. I wanted to practise more but I thought, at the end of the day, you have to be feeling good when the tournament comes and that’s what I did. Last week I played some great golf and hopefully I can keep it going.”

Sagstrom, who made her debut on the European Solheim Cup team at Des Moines, Iowa, in 2017, missed out on playing in the event last week, although her boyfriend, Jack Clarke, was caddying for Caroline Hedwall.

She said: “It was hard, because I wanted to be there really badly and I knew I didn’t play well enough to get in, but at the same time, I feel like I have the game to compete on that level. It was kind of heart breaking, but at the same time it was such a good match and it was so amazing. Watching Suzann finish that last putt off, it was just awesome.”

She is feeling fresh after taking three weeks off and explained: “I had a good practise session three weeks ago with my coach, Hans. I took a week off from playing. Then I went back home to see family and basically spent the entire time in the woods, picking mushrooms and hanging out.

“I only really watched on Sunday, on the couch with my dad, having become tired from the vacation.”

Her bogey-free round of five-under included four birdies on the back nine and one on the front.

Sanna Nutinnen, a runner-up in the Tipsport Czech Ladies Open three weeks ago, is a shot back on four-under.

Defending champion Caroline Hedwall was tied for the lead on four-under before she dropped five shots in three holes at the end of her round, a bogey on the fifth followed by double bogeys on the sixth and seventh, but she steadied the ship with a pair of closing pars for an opening round of one-over 72.

Fellow Solheim Cup players Nelly Korda from the USA and Celine Boutier of France carded rounds of three-under-par and one-under-par to sit in a share of fourth and 12th place respectively heading into Friday’s second round.

Cut to 60 professionals and ties after 36 holes