NEW ZEALAND OFF TO WINNING START IN TOURNAMENT’S OPENING GAME

The game provided plenty of excitement for the crowd inside the M&S Bank Arena to enjoy, with New Zealand supporters particularly vocal in the top tier of the Court One stand.

They were able to see their team avenge the shock defeat they suffered at the Commonwealth Games at the hands of Malawi by getting their World Cup campaign off to a winning start.

The first quarter was a closely-fought contest, with New Zealand edging in front by a scoreline of 17-11 as the whistle blew, largely thanks to the prolific goal shooter Maria Folau.

It was New Zealand who scored the first goal of the game – and the tournament – before Malawi scored four times without reply to bring themselves back into contention. By the end of the first quarter, however, New Zealand had begun to show signs of exerting their dominance on the game.

That position of strength was only increased in the second quarter, as they headed into the halfway point in the match leading by a score of 32-17. 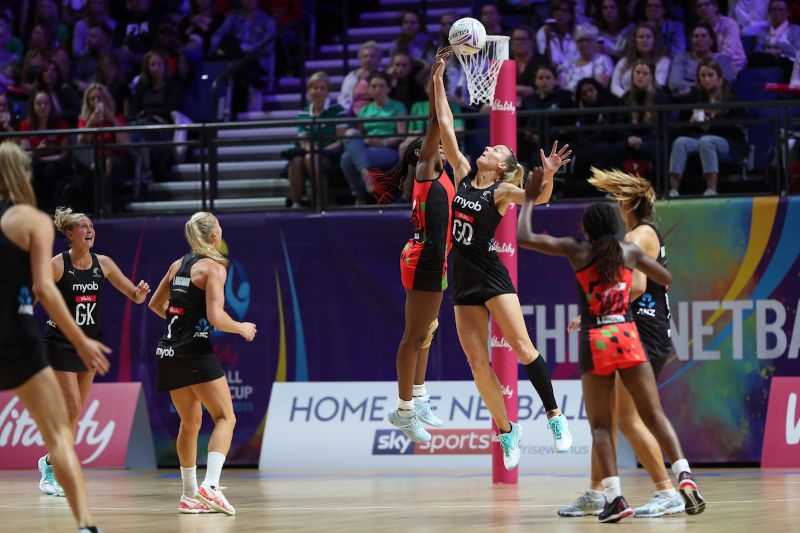 New Zealand goal shooter Folau and goal attack Ameliaranne Ekenasio, the 6’1” 28-year-old, linked up well, while Malawi struggled at times to break down the effective zonal defensive set-up of their opponents.

As umpire Joshua Bowring got the penultimate quarter underway, New Zealand were well in control of the game and they sensibly pressed on, using the momentum gathered during the first half an hour.

Malawi pulled two goals back in quick succession through Sindi Simtowe early in the third quarter before Folau got her side back on track. Malawi’s urgency in possession increased, but with three quarters of the game gone, New Zealand led 49-30.

The final 15 minutes saw New Zealand see the game out, but not without Malawi putting up a fight. The African side notched 15 goals in the final quarter, although New Zealand ran out comfortable victors overall.

New Zealand will hope to continue their good form when they face Barbados tomorrow, while Malawi will look to bounce back in the same session in their fixture against Singapore.