GEORGIA HEFFERNAN RULED OUT FOR SEASON MAGIC AND STARS PLAY OUT FIRST EVER DRAW
Rugby - 23. August 2017.

The most successful teams in Women's Rugby World Cup history will meet in the 2017 final after New Zealand and England ended the title dreams of USA and France respectively in Belfast. 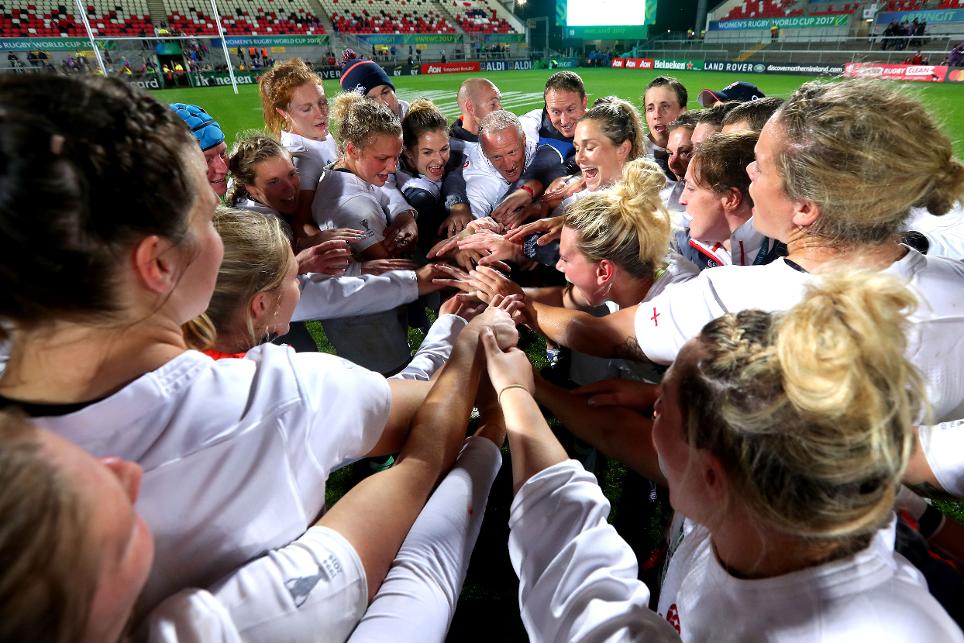 For the fourth time in Women's Rugby World Cup history, England and New Zealand will go head to head for the biggest prize in women's rugby.

New Zealand were victorious in the three previous meetings, amid a run of four successive titles from 1998-2010, and were the first to book their place in Saturday's decider with a 45-12 defeat of USA in the first semi-final. Â

Portia Woodman scored four of New Zealand's eight tries in a physical encounter against a Women's Eagles' outfit playing in their first semi-final for 19 years.

The rain began to fall in Belfast before the second semi-final but that didn't stop England and France from laying everything on the line, the defending champions weathering a first-half onslaught to reach a seventh final and deny Les Bleues their first with a 20-3 victory.

Australia and Canada also had cause to celebrate after victories over hosts Ireland (36-24) and Wales (52-0) guaranteed them a top six finish and, as a result, their place at Women's Rugby World Cup 2017.

The penultimate day of Ireland 2017 also saw victories for Italy and Spain.Â

The attention will then turn to the bronze final between France and USA before England and New Zealand once again meet in a World Cup final.

Four tries from Portia Woodman and another masterclass of attacking rugby from New Zealand saw the Black Ferns reach their fifth World Cup final after a pulsating semi-final against USA at Kingspan Stadium.Â

The semi-final was barely three minutes old when New Zealand opened the scoring after going through a number of phases, captain Fiao'o Faamausili hitting the line at pace and providing scrum-half Kendra Cocksedge with quick ball to put fly-half Victoria Subritzky-Nafatali over in the corner. However, that was a signal for the floodgates to open as the Women's Eagles had already shown when they advanced to the 10-metre line during the cultural challenge.

The physicality on show by both teams resulted in a cacophony of noise inside Kingspan Stadium, neither willing to give an metre and the chants of 'USA, USA' were rewarded when full-back Cheta Emba made the break and looped a pass out to Kris Thomas on her outside, the winger making no mistake from close range. Alev Kelter's conversion gave USA the lead, although it would only be shortlived as Cocksedge kicked a penalty to edge the Black Ferns back into an 8-7 lead.

New Zealand continued to probe and punch at the Women's Eagles defence, not able to break through completely until a moment of magic from Woodman. The winger came off the shoulder of Cocksedge from a scrum on halfway and danced her way through the defence, changing direction and then swapping the ball from one hand to the other to fend off defenders and leaving five in her wake before coasting under the posts.

Cocksedge added the conversion to put the Black Ferns 15-7 up after 25 minutes and it took a try-saving tackle from Selica Winiata, the last line of Black Ferns' defence, to deny Emba a quick riposteÂ for the USA, who had beaten New Zealand in the inaugural Women's Rugby World Cup semi-final back in 1991. The see-saw nature of the game continued, with attacking thrust met by counter thrust, but the scoreboard remained unchanged to half-time.

The second half began with New Zealand in the ascendancy and the Women's Eagles barely able to get out of their own 22, let alone their half with the Black Ferns content to keep making ground with their forwards as their backs kept kicking the ball behind their opponents. A kick through from Kelly Brazier created the third try, Winiata gathering and popping the ball out of the tackle to Woodman for the winger to dive over for her second of the match.

Cocksedge added a penalty in the 55th minuteÂ to push New Zealand out beyond two converted tries, although the 23-7 scoreline was shortlived as Kelter had the crowd on their feet when she burst through a gap and ran towards the right corner, evading the clutches of Winiata and Woodman. The USA fans hoped it was the start of a fight-back, but Woodman had other ideas, a long pass from Cocksedge found Brazier and she spun the ball to Woodman to step inside the defence to complete her hat-trick.

New Zealand lost replacement Linda Itunu to the sin-bin for a high tackle in the 65th minute, but in her absence Woodman scored her 13th try of the tournament, this time the winger juggling a long pass before fending off Emba with ease for her fourth of the semi-final. A calamitous moment from Emba and Tapper nearly spawned another try, the former knocking on and as the two stood still watching, Stacey Waaka ran through and hacked on twice, just failing to touch the ball down.

After that blunder the floodgates open for the four-time champions as first replacement hooker Te Kura Ngata-Aerengamate showed it isn't only the New Zealand backs who have a step in their repetoire when she first caught Subritzy-Nafatali's cross-kick, held the defender and then stepped inside to score. The smile on her face showing it all and then Aon Player of the Match Kelly Brazier changed the line of attack and danced her way through for the final try.

New Zealand captain Fiao'o Faamausili:Â “It took a lot of hard work by the girls, it's so exciting to be in the final. Full credit to our supporters and to the USA who battled all the way through to 80 minutes and they really gave it to us. We're very happy, the girls had to tough it out. We've been training hard throughout the week and I couldn't be any happier. We knew we had to step it up another notch and we did.”

Aon Player of the Match Kelly Brazier:Â “It is pretty special, obviously I was there in 2014 when we missed out (on the semi-finals) and that feeling sort of never goes. To be in the final now that was our aim and I am just excited to be there and I can't wait to take the field with a new group of girls and hopefully lift that cup again.”

USA captain Tiffany Faaee:Â “Credit to the New Zealand girls, we knew they were going to be a tough opponent. It was very physical and after the first half we knew that it has been a pattern of ours to come out strong in the second half, but I think a few clinical errors on our part, just not looking after the ball, and New Zealand with their flat defence were able to capitalise and put some more points on the board. We wanted to start strong and finish strong and we did that in the first half. Some games you are going to win and some you lose but we go away a better team than we came in. Going through the tournament we've learnt a lot of lessons, including in this game, and we look forward to doing better in our next game.”

For the seventh time in eight World Cup tournaments, Les Bleues failed to make it to the final after England weathered their first-half onslaught before wrestling control in the second.

Tight-head Sarah Bern capped a fine display, where she made 13 carries and 16 tackles and was named Aon Player of the Match, with the first try just past the hour-mark before replacement Megan Jones added another at the death, while makeshift full-back Emily Scarratt converted both tries and kicked two penalties.

France brought their attacking game with them to the Kingspan Stadium, particularly in the first half, but they couldn’t find a way through England’s brick wall defence and a 36th-minute penalty from winger Shannon Izar was all they had to show for their efforts.

With two old rivals going head to head for a place in the Women’s Rugby World Cup 2017 final, no quarter was ever going to be asked or given and so it proved. A low-scoring but enthralling first half saw the sides trade penalties for a 3-3 scoreline, but France will have wondered how they had not managed to get in front such was their dominance.

With Marlie Packer leading the way on the occasion of her 50th cap, England repelled wave after wave of attack from Les Bleues and took the lead against the run of play when Scarratt kicked a 15th-minute penalty. Shortly afterwards, Scarratt was forced to play as a makeshift full-back with Danielle Waterman off the field with a head knock and Jones coming off the bench at centre. The positional change did not affect her, and she showed a great sense of timing to burst onto a Katy Mclean pass to trigger England’s only sustained period of attack in the opposition 22.

France’s tenacious work at the breakdown saw the Red Roses penalised three times for holding on, though, and the only other points of the first half came when Izar kicked a penalty from all of 38 metres after Packer blotted her otherwise flawless performance with a high tackle on scrum-half Yanna Rivoalen.

Overall, the second half belonged to England with only a despairing last-ditch tackle from second-row Audrey Forlani denying Kay Wilson a try in the corner. With England piling on the pressure, France conceded a penalty for offside and Scarratt made no mistake to make it 6-3 to the defending champions with 52 minutes gone.

Lenaig Corson launched a rare French attack down the left approaching the hour-mark but Scarratt stood firm as the last line of defence, stopping the dangerous second-row dead in her tracks with a rock-solid tackle. England quickly seized back control and turned the pressure into points when Bern was driven over, with help from fellow prop Vickii Cornborough, for a try which Scarratt turned into a seven-pointer.

Julie Annery, deputising at openside for the standout Romane Menager, thought she had scored in the 68th minute but Jones had just about done enough to drag one of her yellow boots into touch before she could ground the ball. Jones then rubbed salt in France's wounds, charging onto a loose ball as they tried to run it out from their own line to give the Red Roses the final say.Â

England captain Sarah Hunter: “I think it's fantastic that we have come through and done the job we wanted to do. From one to 23 our defence won that game. There was never any doubt that France were not going to get across our line. They were fantastic and have given us the greatest test we have had at the World Cup. We knew we had the right mindset and we fought for every inch. Both sides were going for it and wanted to play attacking style and both defences stood up to it. I think we had a white wall and no way anything was getting through. All through the game people were putting thier bodies on the line and that is what got us through.”