GEORGIA HEFFERNAN RULED OUT FOR SEASON MAGIC AND STARS PLAY OUT FIRST EVER DRAW
Rugby - 27. August 2017. 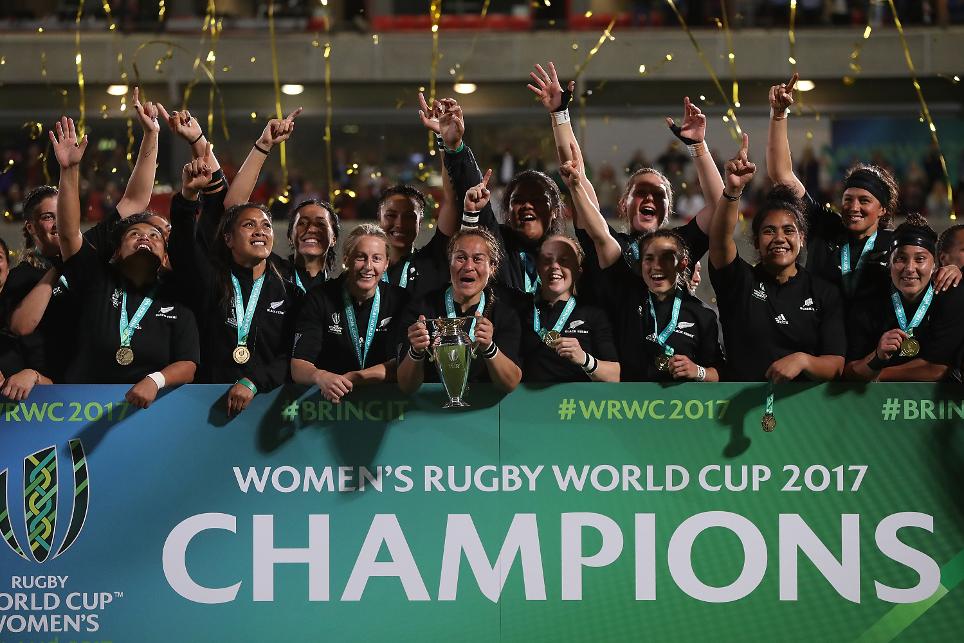 The latest chapter of the Women’s Rugby World Cup story between England and New Zealand did not disappoint with fans lucky enough to be in the Kingspan Stadium or watching around the world treated to a pulsating final that ended with the Black Ferns triumphing 41-32 on Saturday.

New Zealand scored seven of the 11 tries in a match that was the proverbial game of two halves, recovering from 17-5 down in the first half to dominate possession and territory in the second to win the World Cup for the fifth time and ensure they also remain top of the World Rugby Women's Rankings.

Prop Toka Natua scored a hat-trick in the final in Belfast to ensure New Zealand captain Fiao’o Faamausili bowed out with her fourth title and the Black Ferns remain unbeaten in World Cup finals and against England in the showpiece event in the women’s game.

France joined New Zealand and England in the post-final festivities after edging an entertaining bronze final with USA 31-23 with captain Gaelle Mignot among their try-scorers.

Canada overcame a fast-starting Australia to finish fifth with a 43-12 victory, while Wales won their own final, beating hosts Ireland 27-17 to finish seventh and the final direct qualification place for WRWC 2021.

The final day also saw wins for Japan over Hong Kong in the 11th place play-off and Italy, who needed an extra-time try from captain Sara Barattin to beat Spain 20-15 for ninth place.

A dominant second-half performance saw New Zealand come storming back to end England's reign as champions and claim the title for the fifth time in a final that was played out in a cauldron of noise from start to finish.

The three previous World Cup finals between the nations had each been a classic in its own way and the excitement crackling around the Kingspan Stadium during the anthems and Black Ferns' haka signified that the crowd expected more of the same from the top two nations in the world.

Defending champions England had started the better with a probing kick by Katy Mclean helping to keep New Zealand deep in their own half in the opening minutes, but they were unable to turn that early pressure into points and instead a cross-field kick from her opposite number Victoria Subritzy-Nafatali created the opening try. It was meant for Portia Woodman, but dropped in front of her and the ball fortuitously bounced up into the arms of Selica Winiata, the full-back leaving her opposite number Emily Scarratt in her wake to run in the opening try after eight minutes.

Scarratt required lengthy treatment and went to the sidelines briefly to have her left ankle taped, but returned and put England on the board wtih a 15th minute penalty to the delight of the England fans in the crowd. England received another boost when referee Joy Neville ruled that New Zealand flanker Sarah Goss had lifted Mclean above the horizontal, earning the Olympic silver medallist a trip to the sin-bin for 10 minutes.

In her absence, England thought they had scored when second-row Tamara Taylor went over the line, but Kelly Brazier managed to get her arms under the ball to prevent it being grounded. However, from the resulting scrum England got the drive on and referee Neville ended up under the posts signalling for a penalty try.

Goss had just returned when England crossed for their second try of the final, centre Rachael Burford bursting through the defence before combining with winger Kay Wilson. The ball was quickly recycled and a long pass from Mclean found Lydia Thompson out wide, the winger stepping inside and diving over toÂ make it 17-5 after Scarratt's conversion.

New Zealand were having to live onÂ scraps of possession, but on the verge of half-time the four-time champions got a crucial score to bring them back into the match, prop Toka Natua being stopped just short before showing incredible awareness to reach out and turn her arm to ground the ball, all while being unsighted. Kendra Cocksedge missed the conversion, but the Black Ferns would be relieved to be only seven points down at the end of a half England had dominated.Â

Whatever coach Glenn Moore said at half-time clearly had an affect on the Black Ferns as they came out and dominated the early exchanges and were level within five minutes after Subritzy-Nafatali stepped and powered her way through before popping a pass off the floor to prop Takua for her second.

Scarratt saw her penalty go over off the posts in the 51st minute to edge England ahead once more, but New Zealand were getting up a head of steam and went through multiple phases before second-row Charmaine Smith grounded the ball against the base of the postÂ to put the Black Ferns ahead again at 24-20.

The lead lasted barely two minutes, though, as a Subritzy-Nafatali cross-kick fell straight into the arms of Thompson and the winger ran around Woodman to race 50 metres for her second of the match. A third try in five frenetic minutes swung the game back in New Zealand's favour with Natua, a number eight who recently converted to the front row, completing her hat-trick to make it 31-25 in her side's favour.

With New Zealand's pack firmly on top and securing plenty of ball for their team, it was no surprise when scrum-half Cocksedge grabbed their fourth try of the second half just past the hour mark. She couldn't add the conversion but it mattered little as a fifth try came with 10 minutes to go.

Subritzy-Nafatali noticed that Wilson left her wing and put up a perfectly-weighted cross-kick that fell into the arms of Carla Hohepa, the replacement selflessy feeding Winiata on the wrap around for the try that all but sealed victory by taking the score out to 41-25. England, to their credit, battled to the finish and were rewarded when replacement Izzy Noel-Smith finished off a drive.

New Zealand captain Fiao'o Faamausili:Â “It means everything. You couldn’t have asked for a better final than this, there was some amazing talent displayed out there. Credit to England, they are an amazing team with amazing forwards and amazing backs and they just really gave it to us tonight and we had to dig deep and believe in or game. I was really proud of the girls. There was never a moment in that first half that I doubted our performance, it was about being patient and believing in what we could do and then coming out in the second half and doing it, which is what we did. Second half, territory was the key for us.”Â

New Zealand coach Glenn Moore:Â “I am very proud of the team and it hasn’t probably sunk in yet. It is very satisfying for the team and the management staff. Over the last three years we had a plan in place and I think we peaked at the right time. We expected them to come out like they did and we stayed very calm at half-time. Our messaging was clear. England were enjoying something like 71/72 per cent territory and 65 per cent possession so that was putting us under a lot of pressure and we were having to put in a lot of tackles at the wrong end of the park. It is always challenging when you are in that mode because you are at risk of giving away penalties so our messaging was around field position and holding onto possession. We could also see that they weren’t committing to the tackle and were keeping everyone on their feet so we wanted to try and take them on through the middle with the forwards. The try before half-time wasÂ critical. It was probably the first time in a long time that we had been down that end of the park. I am just so proud of the amount of fight they had. It was a calm camp at half-time and they knew what had to be done and they went out there and executed it under pressure really well.”

New Zealand hat-trick score Toka Natua:Â “It is an amazing feeling, knowing that this is not only for me but for my town Tokoroa and the rest of New Zealand. I’d like to thank the heavenly father and the girls out there beside me. They are not my tries alone, they are down to all of us, and if it wasn’t for them I wouldn’t have got over the line. We had no worries at all at 17-5 down. If you let worry creep in, it is just going to take over so we just kept calm and kept that fire in our belly and kept going forward. Our coach (at half-time) justÂ said, it’s now or never and imagine that our family was behind us on defence and that we needed to protect them and not allow anyone to get through.”

England coach Simon Middleton:Â “Massive credit to New Zealand, they were outstanding and found a way to win. We’re disappointed, obviously, but we just couldn’t get the ball in the second half. Fitness never really came into the equation, we had loads of energy. Full marks to New Zealand, they found a way to keep hold of the ball really well, they were very clinical and played in the right areas of the field and Cocksedge was outstanding at nine. The girls have been great, an absolute credit, and it has been a huge privilege coaching them in this tournament. There has been some great talent on show for us with some massive positives coming out of this World Cup in terms of players going forward, and lots of stuff to be going on with, but a little bit of a rest might be in order first.”

England captain Sarah Hunter:Â “We gave it everything but all credit to New Zealand, we lost the momentum and they got on top and we couldn't seem to get our hands back on the ball. I’m so proud of the girls and one loss doesn’t make us a bad team. We can stand tall tonight, but we’re sorry we couldn’t get the win for the fans.”

England fly-half Katy Mclean: “For us, the only thing we have now is massive disappointment. Credit to New Zealand they really took us to it in the second half and we probably didn’t up our game enough to win that. We came here to win, we set that goal from the start and the disappointment from the England team is massive because we feel like we have let people down. But the support we have had here and at home and on social media, it has been absolutely immense and we’re really grateful. If another girl takes us up our brilliant sport on the back of today, that’s one positive we can take from it.”Â