Twelve of the world’s top women’s match racers started competition on Thursday in the 2018 Women’s International Match Racing Series (WIM Series) Finale, hosted at theÂ Carlos Aguilar Match Race (CAMR). After three days of racing, there are four teams –Â Sweden’s Johanna Bergqvist and Anna Ăstling, the Netherland’s Renee Groeneveld and France’s Pauline Courtois – leftÂ at the top of the leaderboard who will vie for the championship title on Sunday in a progression of semi-finals, petite-finals and finals. The elimination process started mid-morning, when after 22 flights of the full round-robin, the top eight teams advanced to the quarter finals and the bottom four sailed a consolation round. Thus, it was a day of lows for some teams and highs for others, much like a weather where dark rain squalls mid-day cleared to a sunlight afternoon with champagne sailing conditions. 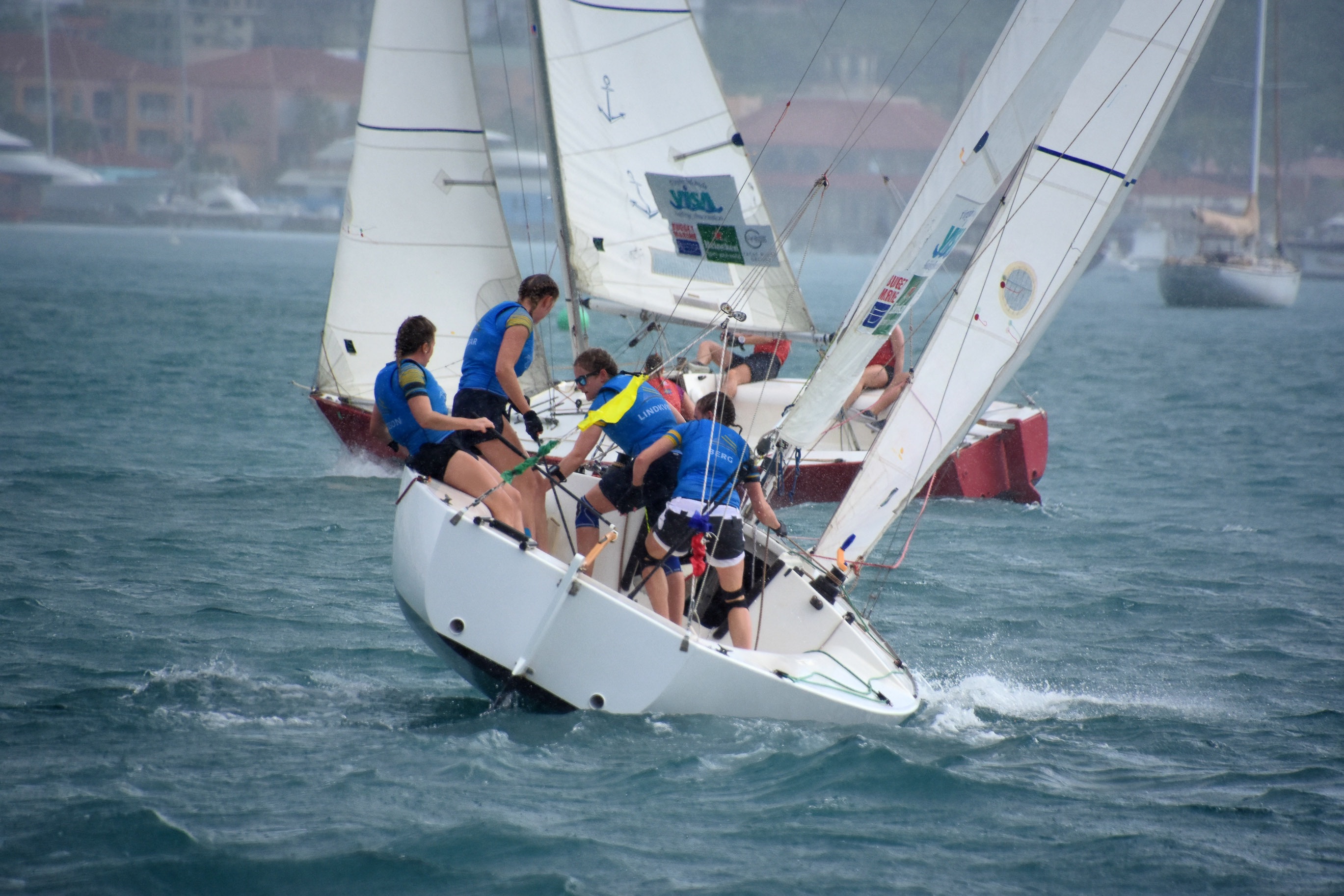 Â
“Yesterday, it was clear we had to improve and to analyze what we needed to do better,” says Groeneveld, defending champion of the 2016 WIM Series Finale at the Carlos Aguilar Match Race, whose Dutch Match Racing Team of Annemieke Bes, Lobke Berkhout and Mijke Lievens ended the second day of racing in fifth and pulled that up to a semifinals berth today. “Today, we led the start in each of our matches and extended that lead right to the finish. Tomorrow, for the finals, we plan to keep an open mind about the wind shifts and take it match by match.”
Â
The USA’s Janel Zarkowsky’s As One team of Isabelle Ruiz de Luzuriaga, Katie Olsen and Rose Edwards made the cut into the quarter finals and lost a spot in the semis following a defeat to France’s Courtois.
Â
“This is our first event together as a team and our goal was to get into the top eight, which we did. In the quarter finals, we had some spicy racing against Pauline (Courtois). What I really enjoy about match racing in general is the pre-start, and the pre-start against Pauline was intense. We both know the basics and the rules well, so we play off each other really well. We really got our money’s worth in the quarter finals,” says Zarkowsky, who plans to compete in WIM Series events in 2019.
Â
Sweden’s Linnea Floser, whose Peregrine crew includes Hanna Ericksson, Sarah Ragle and Ann Johnson, were another team that hoped to make it into the quarter finals. While they didn’t make the cut, they did win the four-team consolation round.
Â
“We, my crew Hanna and I, sailed here in 2016 and getting to know the venue and boats was good, but we were new to match racing back then. This year, just Hanna and I are back and we are sailing with two new crew. One of these, Sarah (Ragle), we have never sailed with before and because she is from the USA we had to remember to speak English not Swedish on the boat. We were really off in our team work at the beginning of the regatta, but we had a good learning curve and today we improved, got back in the game and came out on top of our round.”
Â
Following Floser in ninth in the consolation round is the USA’s Morgan Collins tenth and Sweden’s Sanna Mattsson and Helena Nielsen in eleventh and twelfth, respectively.Â
Â
Known internationally for introducing young sailors to the sport, CAMR organizers work cooperatively with the V.I. government and V.I. Department of Tourism in its efforts to get more of the island’s youth out on the water. As such, the CAMR Youth Regatta took place today. Eleven members of the Boys & Girls Club of St. Thomas-St. John, who have also been enrolled in the Marine Vocational Program, served as crew for the women match race skippers in a best of three fleet race.
Â
“I asked if I could steer as soon as I got on the boat,” says 15-year-old Austin Alexander, a 9thgrader at the Charlotte Amalie High School. “That’s what I liked best. Being in control of the boat and actually feeling the boat respond to the wind.”
Â
Thirteen-year-old Tyra Rollins, an 8thgrader at the Montessori School, took turns between sail handling and steering. “I liked driving the best, especially seeing the boat turn in one direction when I turned the tiller in the opposite way.”
Â
The 2018 WIM Series Finale at the Carlos Aguilar Match Race concludes on Sunday. Racing starts at 9 a.m. local time.
Â
Match racing is sailed in two identical boats around a short course, providing fast action close to the crowds on shore. The intense racing is just as exciting for the spectators as it is strategically, tactically and physically challenging for the competing crews.
Â
The CAMR is a World Sailing (WS)-provisional Grade One event.Â
Â
The event is sailed in IC24s, an adaptation of a J24. The boats are provided by the St. Thomas Sailing Center. The Center is located at the St. Thomas Yacht Club, in Cowpet Bay, and offers professional sailing courses, club membership, boat access programs and racing programs.Â
Â
The 2018 CAMR is sponsored by the V.I. Department of Tourism, Virgin Islands Olympic Committee, Virgin Islands Sailing Association, Heineken and Captain Morgan distributed by Bellows International, Patron distributed by Southern Glazer’s Wine & Spirits, Auven Therapeutics, INOVB LLC, St. Thomas Yacht Club, Antilles School, IGY Yacht Haven Grande, Storage on Site, Prior Family Foundation, Theodore Tunick & Company, Budget Marine, Bolongo Bay Beach Resort, Emerald Bay Beach Resort, VInow, Island Business Graphics, XO Bistro, Anonymous.
Â
Results in the semi-finals (in progress):
Â
Pauline Courtois, FRA – RenĂŠe Groeneveld, NED 2 – 0
Johanna Bergqvist, SWE Â – Anna Ăstling, SWE 1 – 1
Â
Results in the quarter-finals:
Â
RenĂŠe Groeneveld, NED – Margot Riou, FRA 3 – 0
Anna Ăstling, SWE – Margot Vennin, FRA 3 – 0
Pauline Courtois, FRA – Janel Zarkowsky, USA 3 – 0
Johanna Bergqvist, SWE Â – Octavia Owen, GBR 3 – 0
Â
Consolation Round Robin:
(Skipper, Team Name, Country, Wins-Losses)
Â
9. Linnea Floser, Peregrine Racing, SWE, 3-0
10. Morgan Collins, Caribbean Wind Racing, USA, 2-1
11. Sanna Mattsson, Swedish Women’s Match Racing Team, SWE, 1-2
12. Helena Nielsen, Team Nielsen, SWE, 0-3
Â
Standings after Stage One Round Robin:
(Skipper, Team Name, Country, Wins-Losses)
Â
1. Johanna Bergqvist, Team Bergqvist Match Racing, SWE, 10-1
2. Pauline Courtois, Match in Pink by Normandy Elite Team, FRA, 9-2
3. Anna Ăstling, Team Anna, SWE, 8-3
4. RenĂŠe Groeneveld, Dutch Match Racing Team, NED, 8-3
5. Margot Riou, APCC Women Sailing Team , FRA, 7-4
6. Margot Vennin, Matchmoiselles by Normandy Elite Team, FRA, 6-5
7. Octavia Owen, Athena Racing, GBR, 5-6
8. Janel Zarkowsky, As One, USA, 4-7
9. Linnea Floser, Peregrine Racing, SWE, 3-8
10. Morgan Collins, Caribbean Wind Racing, USA, 3-8
11. Helena Nielsen, Team Nielsen, SWE, 2-9
12. Sanna Mattsson, Swedish Women’s Match Racing Team, SWE, 1-10