Thunderbirds And Magpies Draw In Thriller

The Adelaide Thunderbirds and Collingwood Magpies have battled it out in a hard-fought and physical match at Priceline Stadium with the dual ending in a 46-all draw at the final whistle.

The Adelaide Thunderbirds and Collingwood Magpies have battled it out in a hard-fought and physical match at Priceline Stadium with the dual ending in a 46-all draw at the final whistle.

The last time these two teams met, the Magpies claimed an 18-goal victory, and they were hungry to do the same today to keep the possibility ofÂ a finals campaign alive.

Thunderbirds’ Shamera Sterling came to play from the opening whistle, getting her hands to the ball four times and forcing a held ball by Magpies goal attack Gabi Sinclair, all within the first three minutes.

It wasn’t a smooth start for either team with Thunderbirds shooters Sasha Glasgow and Maria Folau uncharacteristically missing several goals early and the Magpies’ also struggling to find flow in their attack end.

It was the Thunderbirds who were able to settle early, taking a four-goal lead 10 minutes into the first quarter. But the Magpies responded well, led by their captain Geva Mentor, scoring four straight goals and bringing the margin back to two with just over a minute to go.

The Thunderbirds took control back in the final seconds, scoring the last two goals of the quarter and taking a four-goal lead into the first break.

The only change made by either teams at quarter time saw Magpies’ April Brandley come on at goal defence for young gun Matilda Garrett.

The defensive efforts of both team’s goal keepers, Mentor and Sterling, were huge, both causing misses up both ends and forcing both teams to work hard in their attack ends.

With the Magpies back to five goals down half-way through the second, coach Rob Wright made the call to bring on Nat Medhurst into goal attack for Sinclair, hoping she might be able to open up and create movement in their goal circle.

The move paid off with the scores hitting 20-all with four minutes remaining, so the Thunderbirds followed suite and changed their goaling combination, with Folau moving into goal attack and Emma Ryde coming on in goal shooter after a stellar performance (28/30) last week. 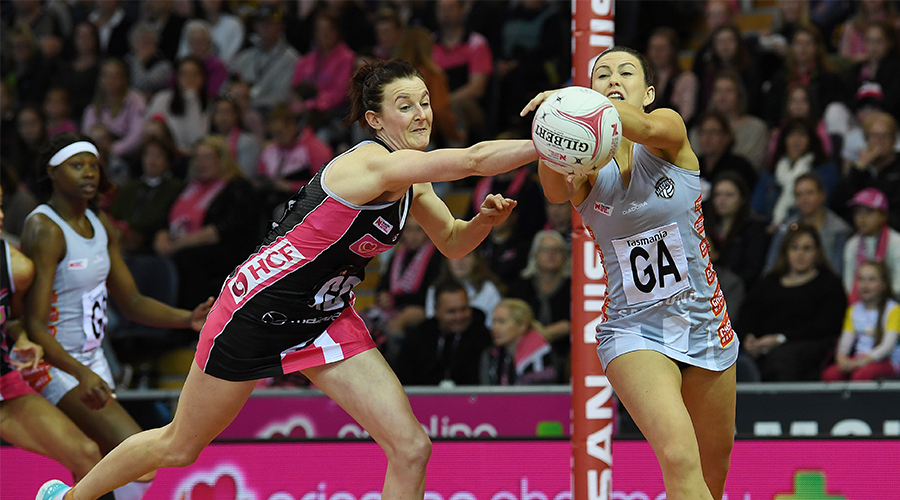 This change also paid off with the Thunderbirds being able to get the lead back as the half-time whistle sounded, 24 to 21.

Thunderbirds coach Tania Obst brought on Kelly Altmann in centre for Hannah Petty off the half-time break and the combination of Folau and Ryde in the goal circle impressed, taking their lead out to five.

With five minutes to go in the third, Wright moved Ash Brazill into centre for Kim Ravillion to build the team’s full court defensive pressure and Melissa Bragg came on in wing defence. The changes had an impact with the Magpies winning their second bonus point for the match and bringing the margin back to two at three-quarter time.

The Magpies continued to chip away in the final term and hit the lead for the first time with six minutes to go. The score then either showed the Magpies up by one goal or even for the remainder of the match.

Shimona Nelson took a last second shot at goal and win the match for the Magpies but the ball bounced off the rim and the siren went with the scores level.