When you talk with Tierna Davidson you feel like you’re speaking with a seasoned veteran. Conversation transitions seamlessly from tactical nuances to opponents’ key strengths and characteristics. That maturity translates on to the pitch where calmness and composure define her game. 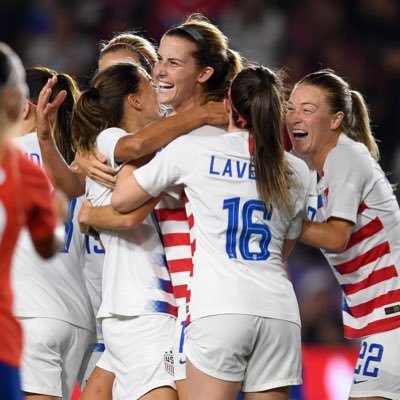 However, Davidson is just 20 years old.

The USA centre-back, who also has experience as a defensive midfielder, is preparing for her first World Cup, where she is a real contender for a starting spot alongside Abby Dahlkemper and Becky Sauerbrunn.

USA head coach Jill Ellis clearly has faith in Davidson, too, as the Menlo Park, California native became the first player since Julie Foudy in 1994 to play the full 90 minutes in her first five senior caps in 2018.

So where does her calmness and composure come from?

“As far as I know, it’s always been with me,” Davidson toldÂ FIFA.com. “I have my own thoughts racing through my head but I guess I look composed at all times. I probably get it from my club team as we played a very tiki-taka style of soccer, so I learned to be composed on the ball.”

Tiki-taka is a possession-based philosophy of football made famous most recently by the Spanish national teams that won the FIFA World Cup™ in 2010 and UEFA EURO 2008 and 2012, and it’s a style of play embraced by teams around the globe, including several during Davidson’s development.

“Stanford [University] is probably one of the top tiki-taka, possession teams out there. There’s so many talented players and so many players who came from that background that wanted to continue that style of play, which was so helpful. Even as a centre-back, I got to play-make, which is really special for me.”

Davidson fits the mould of the modern centre-back as she is not restricted to play in only the defensive zones on the pitch. She has the skillset and soccer IQ to bring the ball out of the back and start moves for her team.

So how does her background playing in this style translate to the USWNT?

“It’s definitely an aspect of our play,” Davidson said. “I think we also have the diversity and the athleticism to go more direct if necessary.

"For example if we need a goal in the last two or three minutes, we have the physicality and athleticism to go and do that as well, and we have the precision from the backline to hit that long ball if necessary. I think it’s a bit more of a mix, and coming to the international level you have to have versatility.”

Davidson, who majored in Management Science and Engineering in university and has a keen interest in aviation and astronomy, has already suffered and overcome serious injuries in her young career. She missed out on the Concacaf Women’s Championship, the qualification tournament for France 2019, after breaking her left ankle while playing for Stanford.

“Coming back from injury really was a big reality check for me,” she said. “I’m just enjoying each game I have and training with this amazing group of women because ultimately you can’t take anything for granted and just have to enjoy the moment.”

When she steps on to the pitch in France, she will enjoy the moment while looking the part, even though they will be her first steps on the world stage.