GEORGIA HEFFERNAN RULED OUT FOR SEASON MAGIC AND STARS PLAY OUT FIRST EVER DRAW
Hockey - 26. November 2018.

The Netherlands extended their winning streak to 43 as they swept imperiously to victory in the Wanglibao Hockey Champions Trophy Changzhou Wujin. The victory also ensured the team remained at the top of the FIH Hero World Rankings – a position they have held since October 2011. 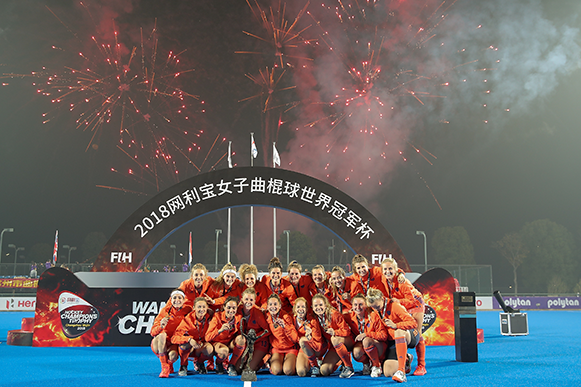 Australia put up a staunch defence and are a team that is definitely building in stature, confidence and maturity but they were no match for the Netherlands in this form.

The first Netherlands goal came from Xan de Waard. The midfielder latched onto a ball that had rebounded off goalkeeper Ashlee Wells' pads after a fierce shot from Margot van Geffen.Â

Just a few minutes later the athlete voted Best Player of the Tournament, Eva de Goede, scored a cracker of a goal to double her team's lead.

These were the only goals in the first half but the stadium of hockey fans was treated to a stunning display of swift passing hockey and sumptuous ball skills.Â

The Australian team defended with their usual grit and, in players such as Rose Malone, Brooke Peris and Maddy Fitzpatrick, it is clear that the team has a bright future, but for the second quarter it was all about the Netherlands.Â

As Maxime Kerstholt sprinted the length of the pitch with yellow-shirted players giving chase, it was just one more piece of evidence that Head Coach Alyson Annan has created a team that is going to be difficult to defeat for the foreseeable future.Â

The third quarter came alight as Australia took the game to the Dutch. A sustained period of pressure saw the Hockeyroos rewarded with a penalty corner. Maddy Fitzpatrick made no mistake as she shot past Anne Veenendaal and gave her side more impetus to attack.Â

For a few minutes there was a glimmer of hope for the Australia side but then Lauren Stam stepped up to slam home a penalty corner and restore the Netherlands advantage.Â

The fourth quarter saw both teams putting on a fine display of attack and defence. Aerial balls crossed the pitch and were controlled with audacious skill; Jodie Kenny led the Australia defence with courage and young players such as Laura Nunnink and Margot Zuidhof attacked with impunity.

Kerstholt's ceaseless running paid off when she struck home her teas fourth goal and then Maria Verschoor was on hand to put away the rebound after a great initial strike from Rising Star Marijn Veen.Â

"We really try to always keep things simple," said Head Coach Alyson Annan. "It's not always easy but that's what we do. The ball moves faster than a person, so we just pass quickly.

"When you have a team of players with different abilities, a lot of different characters, then it is a question of balance," said Head Coach Alyson Annan. "We are always challenging ourselves to be the best we can be. We focus on our performance, not that of our opposition."

Just as they dominated the tournament, so the Netherlands were recognised in the individual awards. Eva de Goede was voted Best Player and teenage sensation Marijn Veen took both the Rising Player and top goal scorer award, with five goals to her credit.

China's Ye Jiao was the deserved winner of the Best Goalkeeper award.

The FIH Hero World Rankings were updated at the end of the competition. Great Britain/England remain in second position by virtue of their win over Japan. China move to tenth after their fourth place finish. Australia remain at number three, with Argentina at four. Japan are ranked 14th in the world.