The Melbourne Vixens have shown they’re building towards a strong finals campaign with their 64-52 win over the West Coast Fever at Melbourne Arena.

The last time these two teams met, it was a 63-all draw and the Fever were without their captain and key player Courtney Bruce, but this match was very different.

From the outset, the Vixens showed they had come to play and took an early five-goal lead within the first to five minutes thanks to some brilliant deliveries into the goal circle by the league’s leading feeder Liz Watson.

In what will be one of the highlights from the weekend, Vixens goal defence Jo Weston put one of her signature one-armed long bombs into Caitlin Thwaites under the post half-way through the first quarter, resulting in Thwaites’ sixth straight goal for the match.

Fever goal keeper Bruce took two key intercepts in the first 10 minutes of the match and played a major role in getting her team back to within two goals of the Vixens.

The Vixens finished the quarter strongly, thanks to some stellar defence by Nissan Player of the Match Emily Mannix and Weston, and took a 19-14 lead into the first break.

The intensity of the match saw some fumbling from both sides leaving easy opportunities for the opposition to capitalise. The Vixens goal circle in Thwaites and Tegan Philip were as accurate as ever, Philip only missing two goals and Thwaites at 100% by half-time. 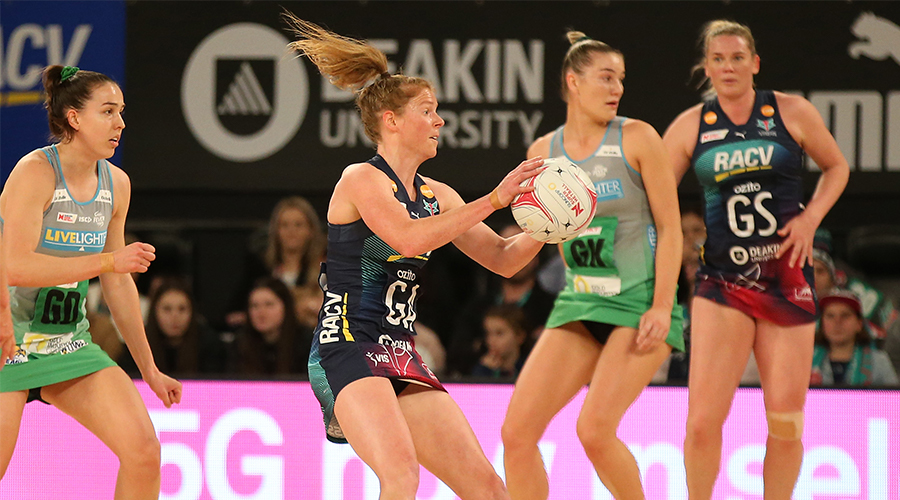 Stacey Francis came on for the West Coast Fever in wing defence for Jess Anstiss, and in doing so, she reached her 50th national league match milestone.

It was the Vixens who took control of the second quarter, stretching their lead out to a match high 12 goals by the main break and claiming their second bonus point of the match.

The Fever made some changes at each end of the court to kick off the third with Beryl Friday coming on for her debut in goal attack for Alice Teague-Neeld, Bruce moving to goal defence and Olivia Lewis coming on in goal keeper.

The changes worked in the Fever’s favour and they came out firing in second half, scoring the first four goals of the second half and getting back within eight.

The experienced Vixens responded well and stretched the lead back out to 13 half way through the third, but it couldn’t stop a steam-rolling Fever who came back to claim the third quarter bonus point, winning the quarter 15 to 12 goals and bringing the margin back to nine going into the final break.

The last term remained quite even for the first half but the Vixens settled and took a stranglehold of the match, scoring seven goals in a row. Their run was only boosted when Mwai Kumwenda took to the court for the first time in over a year, after overcoming an ACL injury.

Led boldly by their captain Kate Moloney for the entire match, the Vixens went on to win the final bonus point and claim their 8th win of the season.