GEORGIA HEFFERNAN RULED OUT FOR SEASON MAGIC AND STARS PLAY OUT FIRST EVER DRAW
Football - 04. September 2019.

Following on from the fantastic recent success of the Women’s World Cup I personally feel the importance of carrying on this legacy and promoting the opportunities that are available to women and more specifically young girls in the sport and encouraging those with talent to follow their dreams and achieve the success they deserve.

I was recently lucky enough to speak with two highly talented and successful female footballers, Liv Cooke and Harriet Pavlou, that have now moved their sporting careers into freestyle football. Both women use a lot of social media to promote their skills and use it as a platform to inspire and motivate the next generation of female footballers. Through platforms such as TikTok, that allows videos to be uploaded onto the site, more and more girls are finding their place within the sport and finding out that anything they dream to be possible is within their reach if they work hard enough. 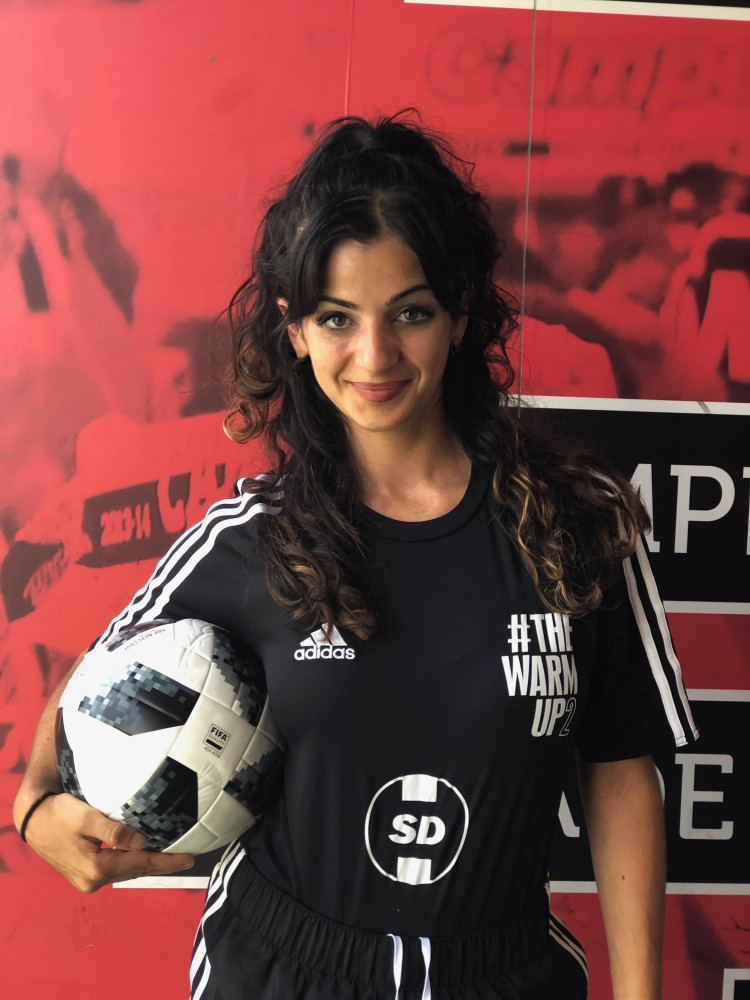 Harriet has had an impressive career in football, she discussed it with me earlier this month…

How did you get into football and how did your career progress?

I haveÂ  always loved football, at 11 I got selected to start playing for England, then I played for Arsenal and then after a short break from the game started playing for Charlton. From here I found that all the training sessions were affecting my studies so I stopped football to train to be a PE teacher. I realised I was still really good at football and all the skills and after watching some online videos I felt like I could do that too and it just took off from there, I started making videos which started going viral, I set up a TikTok account and he videos also went viral on there and I now have 2.1 million followers on there.

How important do you think social media is for raising awareness for what you do and for females in football?

It’s hugely important to me, having 2.1 million followers is massive, I go out in the streets and people recognise me as the girl from the videos and TikTok for me is more personal and you interact with more everyday people and it helps raise awareness through that relatability and the fact that people feel they can talk to me and know me.

What kind of message do you want to put out to young girls through social media and TikTok lookingÂ to get get into football?

I am so proud of England and the World Cup and it being finally shown and I think it’s so important that young girls are inspired, the percentages are so low of girls playing football in school and there is still the feeling that only boys can play and the girls that can play are having to be part of the boys team and that’s where the gap lies and I think it’s massively important following on from the World Cup that girls need to see that it is possible to make a career out of this sport. When I was younger I couldn’t see a way that I could make a career out of this sport and now girls are able to see that this is possible and they can do it.

Following on from the success of the World Cup, what kind of things would you like to see put in place now to make football more accessible to girls and women wanting to take up the sport and start to pursue a career?

I think it’s so important that certainly the media gets behind the female footballers now and the showing of female football on our televisions needs to carry on, not just the World Cup. It needs to be pushed more, you are seeing women on the posters and on packages and that needs to remain and carry on.

What advice would you give to young girls that have been inspired by the football and want to join a club or get into freestyle?

Never give up. Train hard and make sure you are genuinely passionate about football and focus on that, don’t try and juggle too many things, keep your focus clear and push for that. Never let the fact that you are a girl intimidate you, keep going and relish in the fact that you can be so much better than any of the boys you play with or against. Show them up and enjoy it, it’s so exciting to be a girl and playing football so have the confidence to believe you can do this and keep going.

Liv Cooke has had an equally impressive career in women’s football, she took the time to interview with me, read on to hear her story…

How did you passion in football start?

Being born into a family with two older brother’s that are football crazy it was hard not to fall in love with the game. I would always be out on the street or in the garden playing mini games with them.

How did your career take off and what drew you to freestyle?

I joined my local girls team at 10 and then progressed through to the Blackburn Rovers academy at 15 but whilst there I suffered a pretty bad injury which I couldn’t get rid of. Whilst out injured I was determined to continue improving so I’d be in my garden trying to juggle the ball without hurting my back. This is how I learnt to juggle sat down. It wasn’t long until I discovered the world of freestyle football and fell in love. The freedom, feeling of landing a new move and never ending opportunity for progress hooked me. I haven’t looked back since...

How has social media and TikTok helped your career take off?

Social Media has played a massive part in people knowing about me, following my journey and it allows me to connect with my fans which I think is the most important aspect. Instagram stories in particular, I think gives my followers a glimpse in to my personality and daily life as I treat is a instant vlogging feature. Tik Tok I feel allows me to engage with a younger audience who perhaps are not on instagram or twitter.

How do you think k platforms like TikTok help inspire young girls into football?

TikTok is the perfect place to showcase my footballing skills as these young girls are more than likely not on other platforms and not interested in watching sports on TV. So, from a young age they’reÂ

seeing my videos on TikTok and seeing that a female can do it better than the boys. They’re being shown that they too can play.

How would you advise them to showcase their skills on social media and TikTok?

I think by keeping it real. These days people are fixated on creating perfection, looking and seeming perfect. It’s not real and people feel that. If it feels forced or unnatural people unfollow as they cant relate. For example, every so often I will share a video of my skills executed to perfection but to remind everybody I’m just a normal person that works hard I will show all the failed attempts that lead up to it, all the frustrating moments from the training sessions beforehand. You are amazing, just be YOU!

Who was your role model growing up?

Footballing wise it was Ronaldinho. He is special, he played football with a smile on his face and his ability was absolutely incredible! I’ve watched all of his videos. People won’t expect this but, as of right now the people I take most inspiration from the most are Conor McGregor or DJ Khaled. Whenever I’m feeling nervous or I feel my mindset weakening I watch Conor’s interviews. His mindset and confidence is infectious. Those traits combined with DJ Khaled’s positive affirmations and all round positivity helps me see the opportunity in every situation and feel like no goal is too big, no situation too tough and no set back too much.

My 9 year old niece is a football fanatic and big fan of TikTok,she would love to know how many hours a day you have to spend training to be as good as you are?

I train on average 4 hours a day but when training for a competition it’s 6 hours physically and mentally constant. It’s literally all I will think about, to the point I end up dreaming of winning...

But often young people tell me “I want to be as good as you when I grow up”. This is so lovely to hear but it also frustrates me. I tell them “no. You must aim higher than that. I’m not special. You can be way better than me. In every way. You can achieve anything you want if you want it badly enough. Just promise me you’ll aim higher than me.”

What would you say to young girls looking for a career in football?

There has never been a better time to be a female footballer, take advantage of all and any opportunities. Football is the greatest game in the world it unites people, keeps you fit and lets you make new friends. Find out where your nearest team is, join up and just have fun!

Football has always been the nations sport and it is marvellous to see more and more girls picking up a ball and taking to the field, and just as wonderful to see this be promoted on national platforms now and gaining the recognition and respect these women deserve.

You can find Liv and Harriet on TikTok by following the tags @harrietfreestyle and @livcookefs, I just hope they have inspired you as much as they have me, we would love to hear your stories and share your videos on social media.