Vixens stave off Magpies in opening round closer Reigning premiers claim Round 1 victory
Other Sports - 20. February 2020. 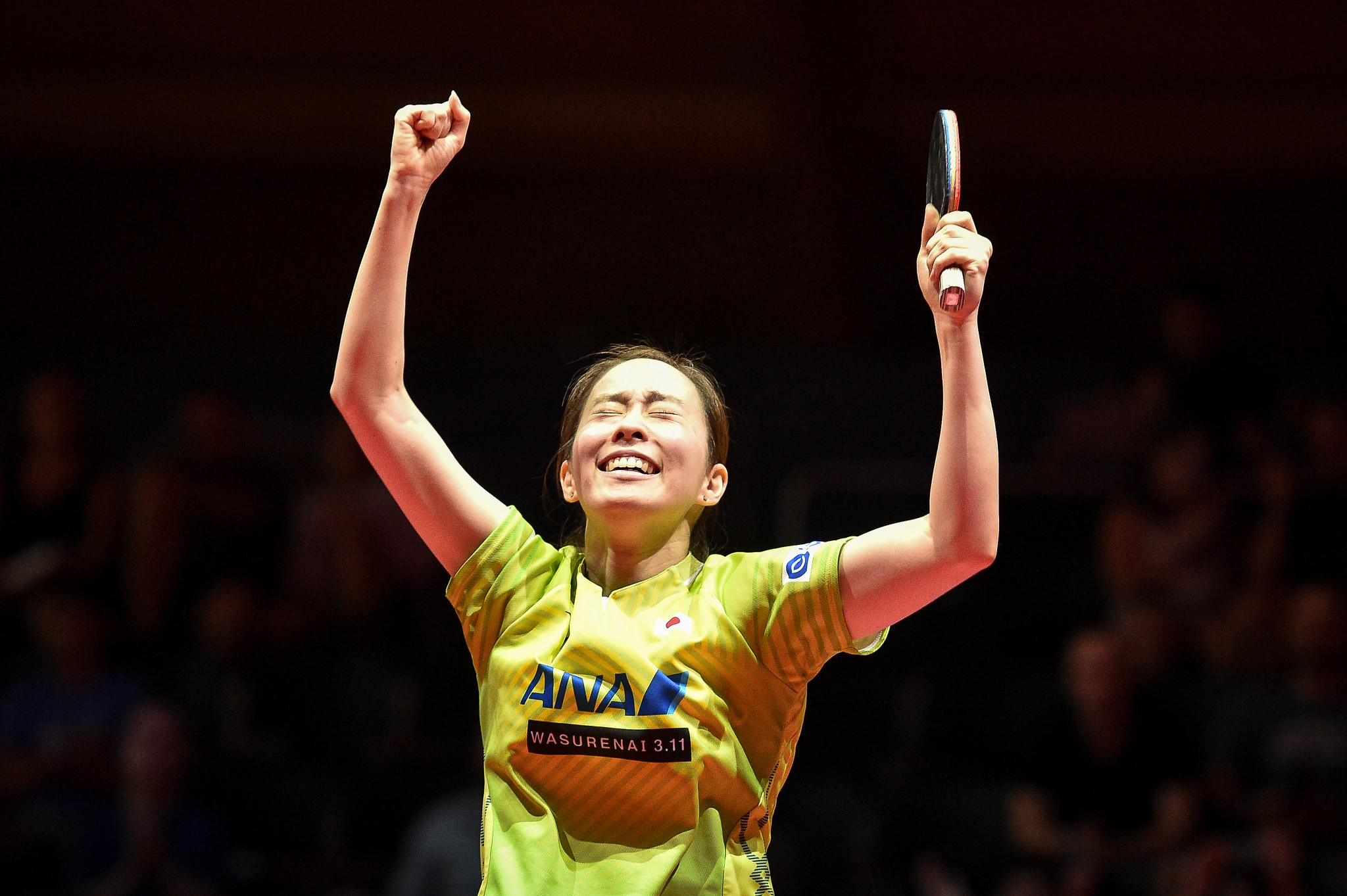 Â
Harimoto hoping to kickstart year in Hungary
Â
World no.5 Tomokazu Harimoto appears in the same half of the draw as Germany’s world no.10 Dimitrij Ovtcharov, the no.3 seed. At the first ITTF World Tour event of the year, the German Open in Magdeburg, the pair experienced contrasting fortunes.
Â
Surprisingly, Harimoto was beaten in the opening round by Chinese Taipei’s 38 year old Chuang Chih-Yuan; by contrast Ovtcharov reached the semi-finals by eliminating Fan Zhendong, who started the year on top of the world rankings. Ovtcharov's progress on home soilÂ eventuallyÂ came to a halt in the penultimate roundÂ at the hands ofÂ Ma Long, the reigning Olympic Games and World Champion.
Â
In Budapest, Harimoto is joined in the same quarter of the draw by compatriot Koki Niwa, the no.5 seed and a player with whom he will line up alongside at the upcoming Hana Bank 2020 World Team Championships in Busan, Korea Republic, and at the Tokyo 2020 Olympic Games. Harimoto held the upper hand over Niwa in their most recent meetings at the T2 Diamond in Singapore and the Chengdu Airlines Men’s World Cup.
Â
Meanwhile, Ovtcharov could potentially face a former Hungarian Open winner at the quarter-final stage, with Japan’s Jun Mizutani, the no.6 seed and winner in 2010, and Austria’s Daniel Habesohn, the no.15 seed and 2014 champion, both positioned in the same section of the draw.
Â
Can Calderano strike twice in two weeks?Â
Â
In the opposite half of the draw, Brazil’s Hugo Calderano, the no.2 seed and world no.7, is in the hunt for his first ever ITTF World Tour title just two weeks after retaining the Pan America Cup in Puerto Rico. 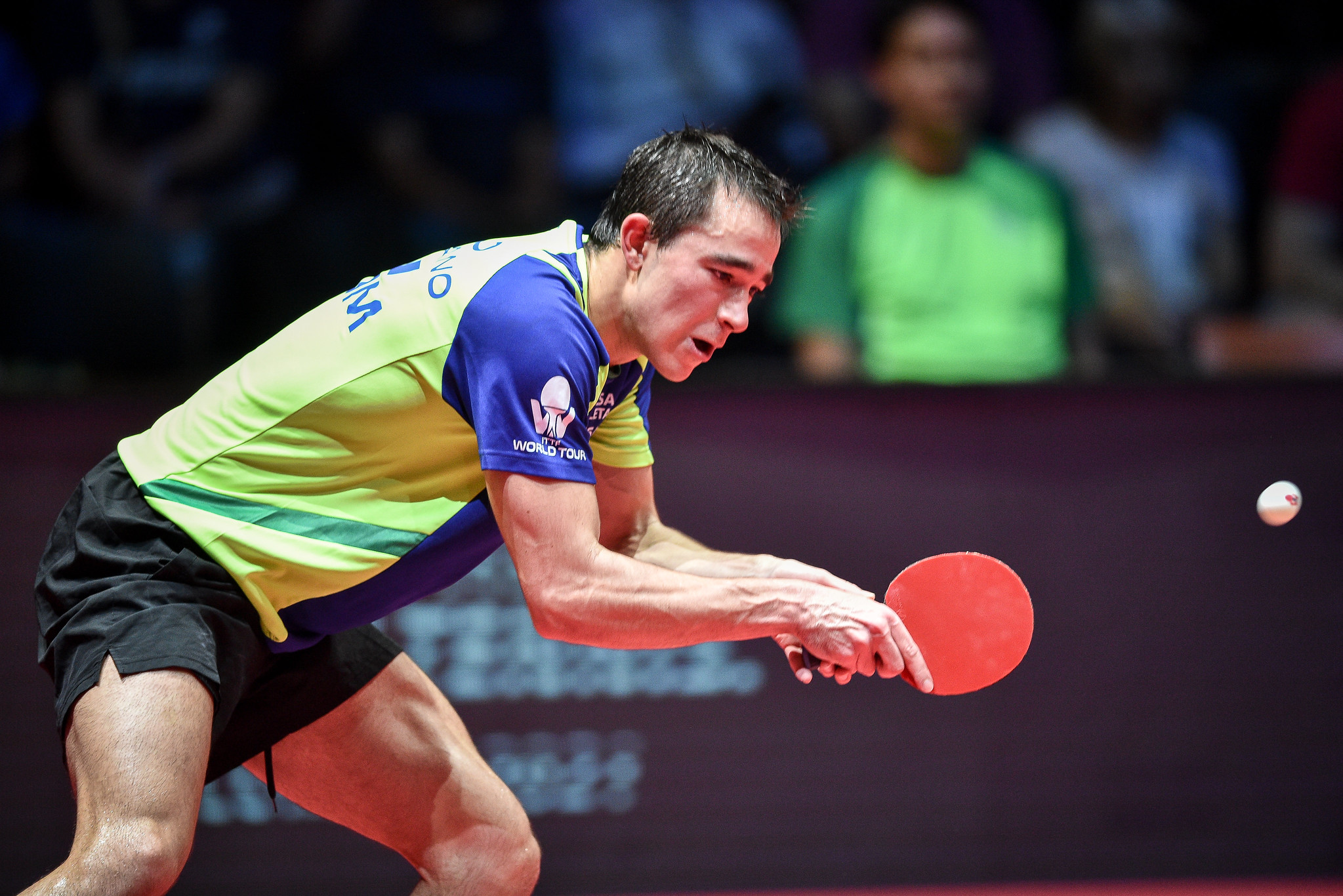 Hugo Calderano looking to make history in Hungary.
Â
Calderano is named in the same half as his TTF Liebherr Ochsenhausen clubmate, Frenchman Simon Gauzy, the no.8 seed, who in turn faces a first-round showdown with Germany’s Qiu Dang, winner at last week’s ITTF Challenge Plus Portugal Open.
Â
Fellow German, Patrick Franziska, the no.4 seed, will be keen to bounce back from his shock opening round defeat to Japan’s Mizuki Oikawa at the German Open. Franziska could face a second round meeting with American rising star Kanak Jha, the no.12 seed, or recently crowned Japanese national champion Yukiya Uda.
Â
Meanwhile, potential quarter-final opponents are Hong Kong China’s Wong Chun Ting, the no.7 seed, and 43 year old Vladimir Samsonov of Belarus, the no.10 seed and the winner of no less than 27 ITTF World Tour men’s singles titles. 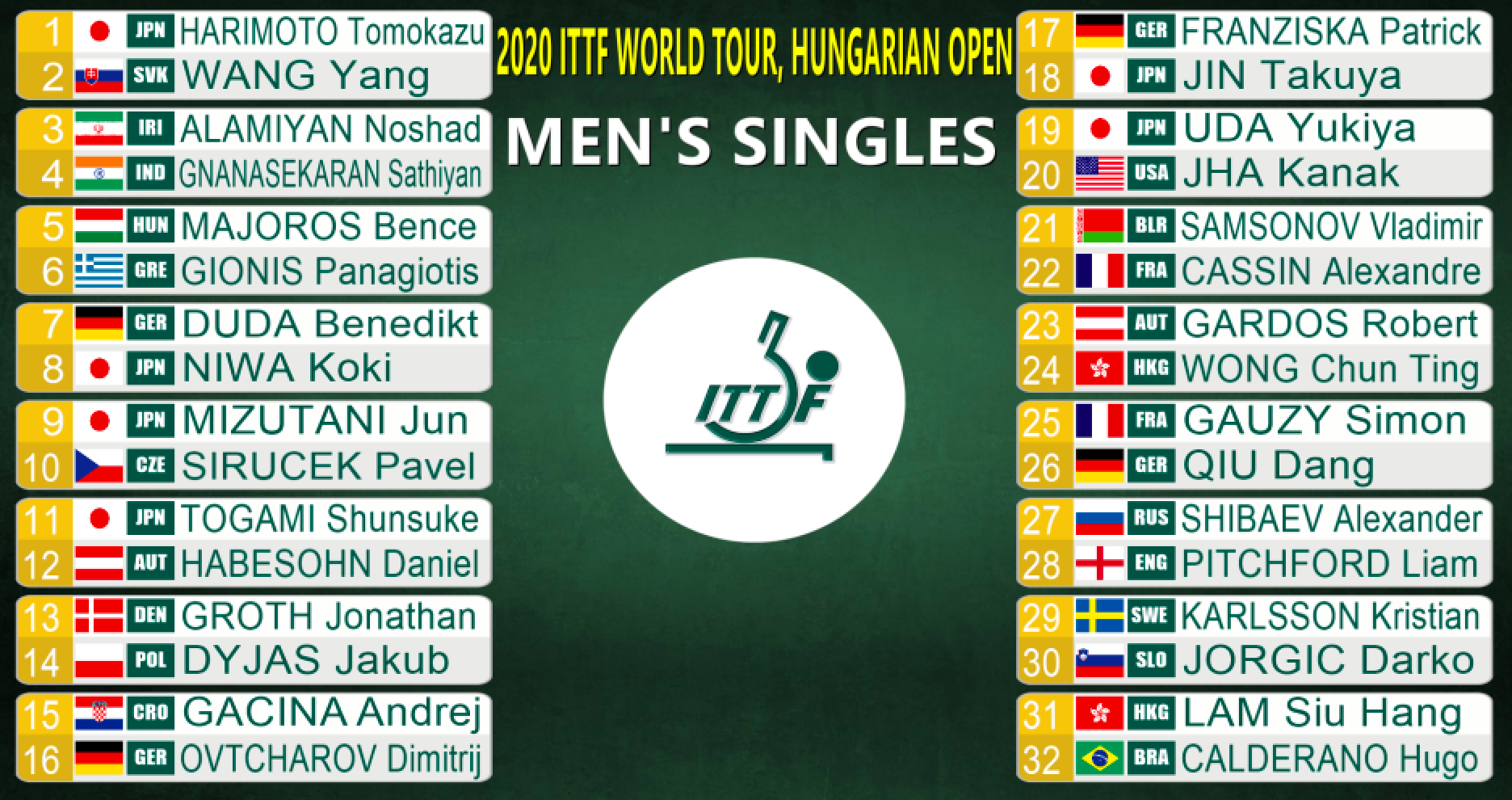 Â
Japan’s women going for gold
Â
Names from the Land of the Rising Sun prominent in the men’s singles event, they are even more prevalent in the women’s singles competition. Top seed and world no.3 Mima Ito, a quarter-finalist in Germany, beaten by China’s Ding Ning, is in the same quarter of the draw as colleagues Hitomi Sato, the no.6 seed and Miyu Kato, the no.10. Kato and Sato are scheduled for a second round meeting; in world ranking events, Kato has always beaten Sato.
Â
Miu Hirano, the no.4 seed, also appears in the same half of the draw as Ito and company. A potential quarter-final against Romania’s Bernadette Szocs, the no.7 seed, could materialise. Hirano is currently unbeaten against Szocs on the international scene.
Â
In the lower half of the draw, Kasumi Ishikawa is the only seeded Japanese name present, though the no.2 seed starts her campaign against compatriot Haruna Ojio with a potentialÂ secondÂ round meeting against another Japanese,Â Miyu Nagasaki, the reigning ITTF World Junior Champion.

Featuring in the same quarter of the draw areÂ two players who recently booked their places in the Women’s World Cup to be staged in October 2020 in Bangkok. Puerto Rico’s Adriana Diaz, the no.9 seed, lines up against Nagasaki in an eye-catching opening round duel,Â while Germany’s Petrissa Solja, the no.8 seed, could be a quarter-final opponent for any of the aforementioned players.Â Earlier this month, Diaz retained her crown at the Universal Pan America Cup and Solja likewise at the CCB Europe Top 16.
Â
Hong Kong China’s Doo Hoi Kem, the no.5 seed, and Chinese Taipei’s Cheng I-Ching, the no.3 seed, could be in line for a quarter-final battle. Last year they met twice on the international scene, Doo Hoi Kem winning at the ITTF-Asian Cup in Yokohama, Cheng I-Ching at the ZEN-NOH Team World Cup in Tokyo. 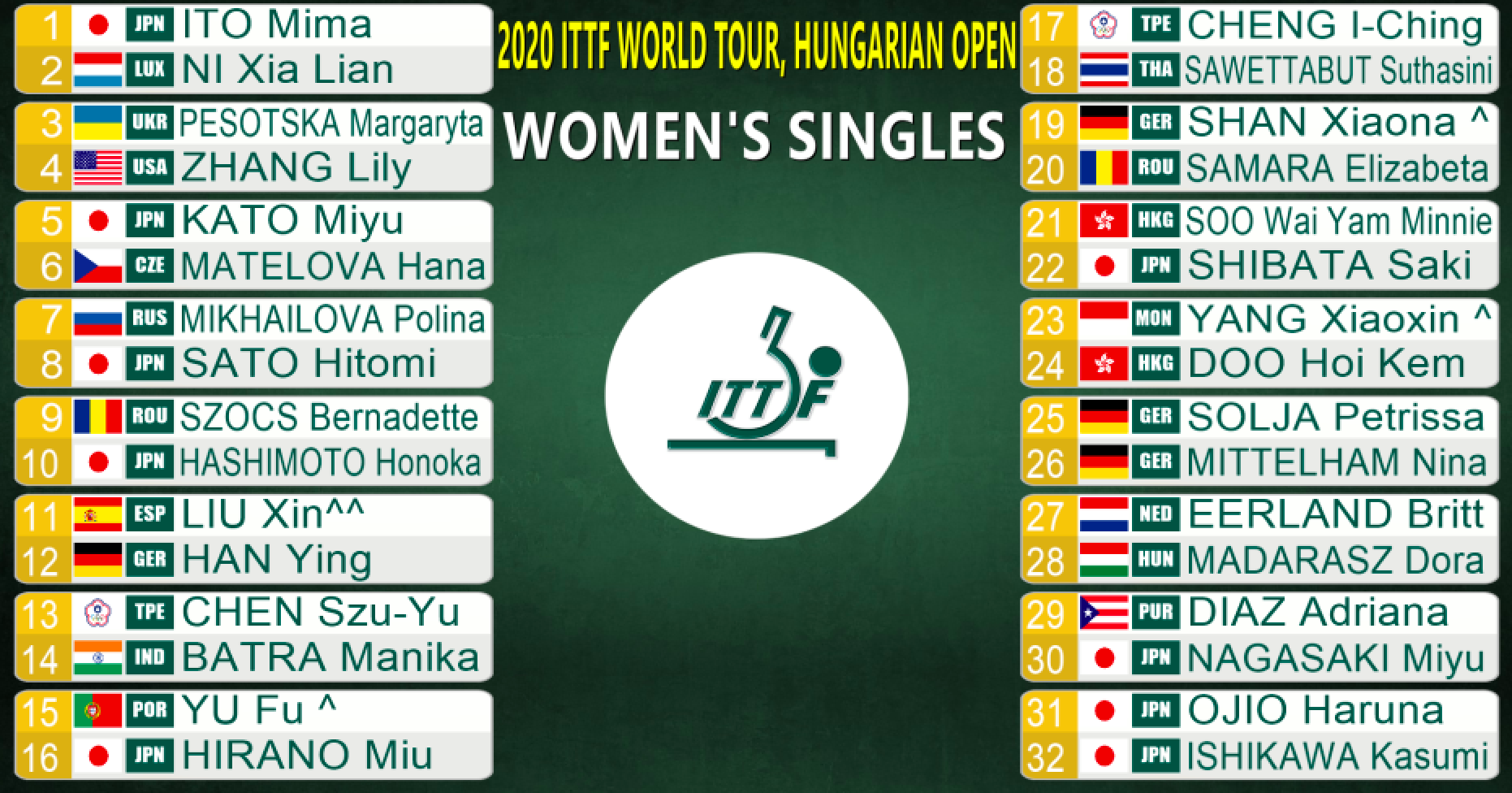 Â
The pick of the doubles pairs
Â
In the women’s doubles, Chen Szu-Yu and Cheng Hsien-Tzu head the seeding. The Chinese Taipei pair were silver medallists at the Agricultural Bank of China 2020 ITTF World Tour Grand Finals. They appear in the same half of the draw as Japan’s Miu Hirano and Kasumi Ishikawa, the no.4 seeds, runners up earlier this month in Germany.
Â
In the opposite half, Doo Hoi Kem and Hong Kong China colleague Lee Ho Ching occupy the no.2 seeded spot, while the mixed nationality pairing of Slovakia’s Barbora Balazova and Czech Republic’s Hana Matelova weigh in at no.3. 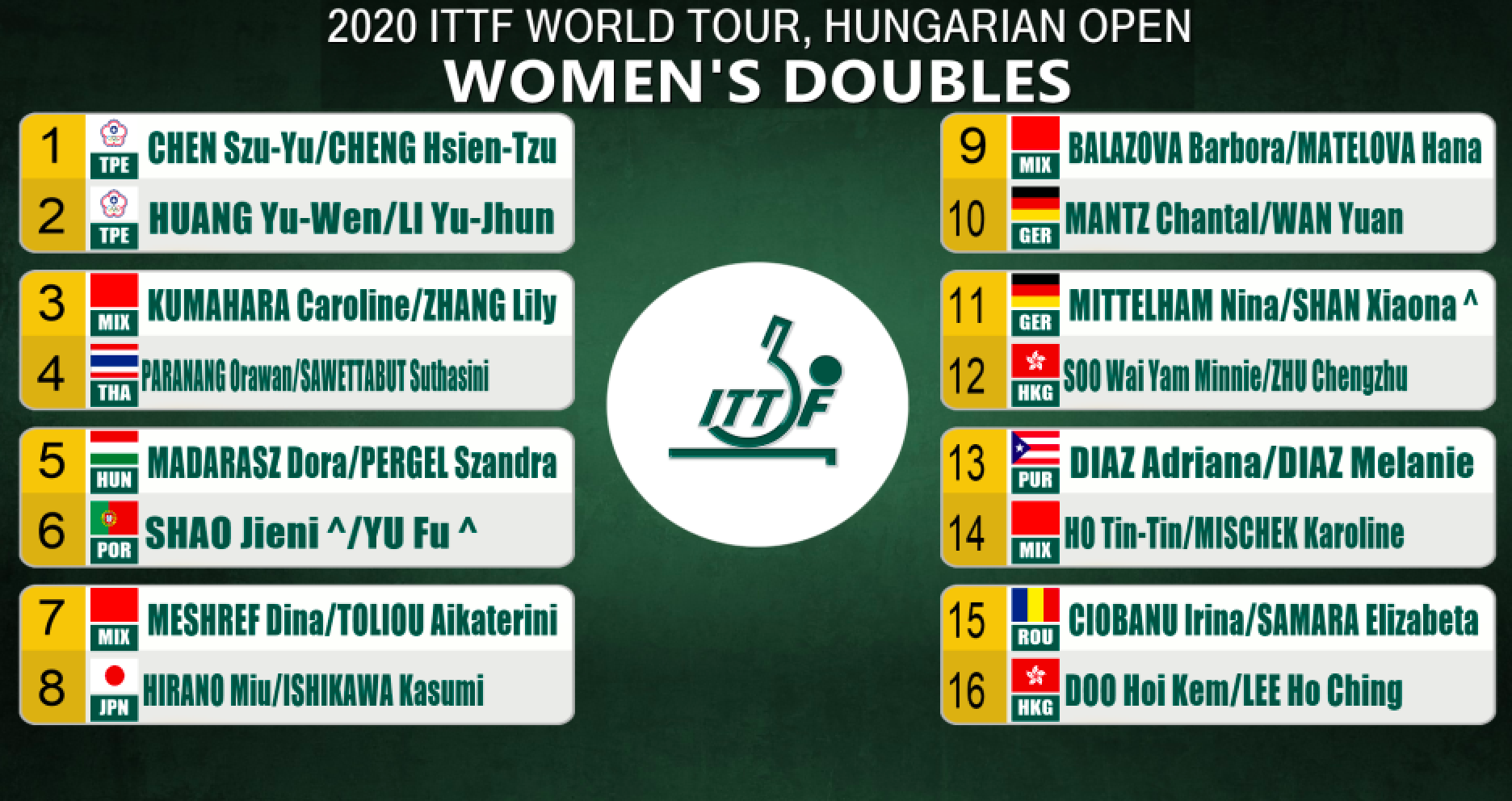 Â
Chinese Taipei is represented prominently again in the men’s doubles with Chen Chien-An and Chuang Chih-Yuan the no.3 seeds. World champions in 2013, interestingly they have never reached an ITTF World Tour final. In Budapest, they sit in the same half of the draw as the somewhat untried German partnership of Benedikt Duda and Patrick Franziska, the no.2 seeds.
Â
The pair to note in that half of the draw is Poland’s Jakub Dyjas and Belgium’s CĂŠdric Nuytinck, the no.6 seeds, recent semi-finalists in Germany and Sweden on the ITTF World Tour.
Â
In the opposite half of the draw, the home Hungarian crowd will be behind Nandor Ecseki and Adam Szudi, the no.4 seeds and winners at the 2018 ITTF Challenge Croatia Open. The top seeds are Hong Kong China’s Ho Kwan Kit and Wong Chung Ting, the runners up at the ITTF World Tour Grand Finals in both 2017 and 2018. 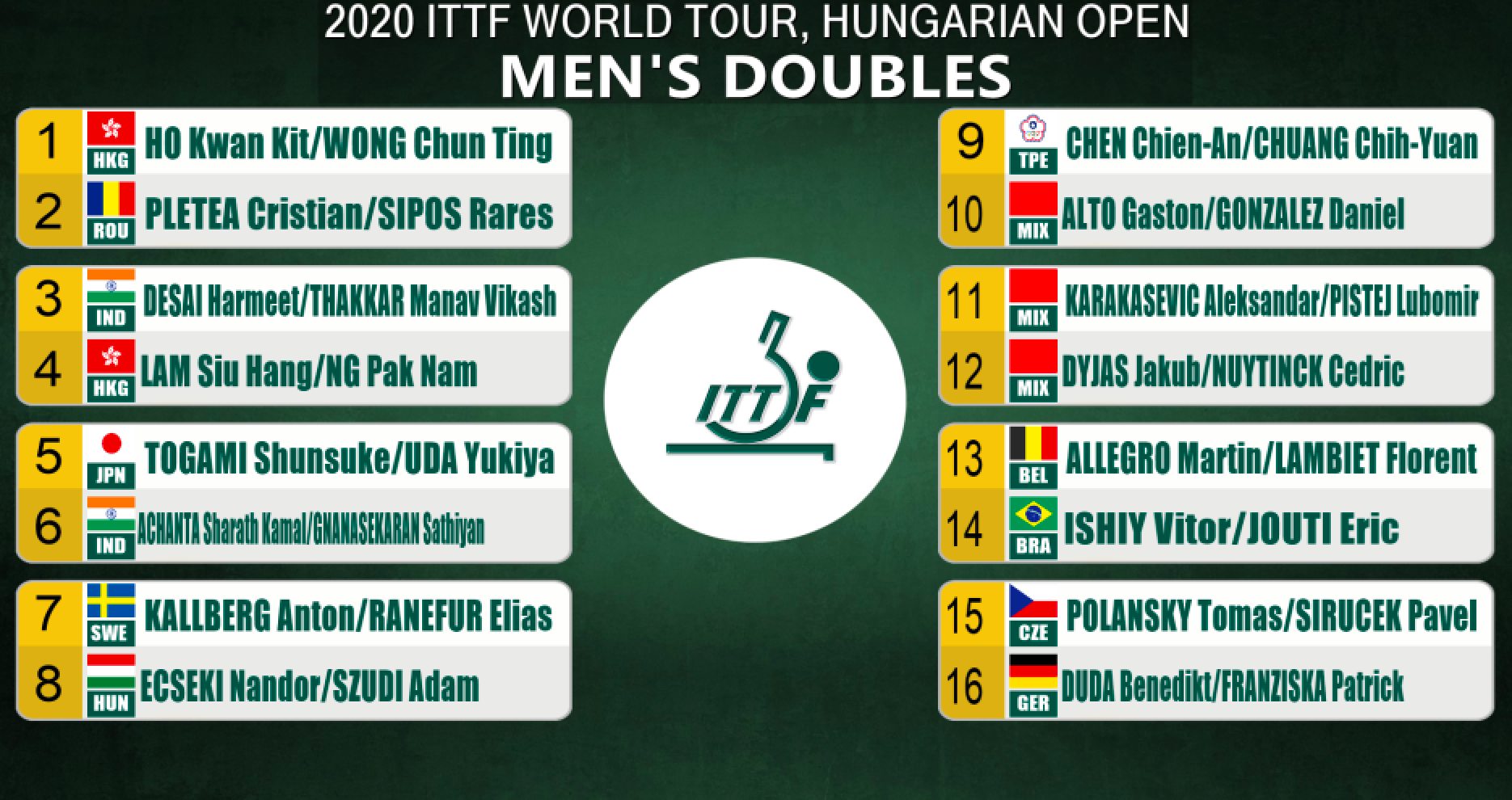 Â
Top of the order in the men’s doubles, it is the same for Wong Chun Ting in the mixed doubles, where he partners Doo Hoi Kem; they are listed ahead of no.2 seeds, Jun Mizutani and Mima Ito. Both pairs have reached the title deciding round at the ITTF World Grand Finals: Wong Chun Ting and Doo Hoi Kem won in 2018; last year Mizutani and Ito finished with silver medals.
Â
Hong Kong China colleagues Ho Kwan Kit and Lee Ho Ching, the no.4 seeds, appear in the same half of the draw as Wong Chun Ting and Doo Hoi Kem; Mizutani and Ito are joined in the same section by Slovakia’s Lubomir Pistej and Barbora Balazova, the no.3 seeds.
Â
Successful partnerships but the pair to note is that of the host nation’s Adam Szudi and Szandra Pergel, the no.5 seeds and last year’s Hungarian Open silver medallists. 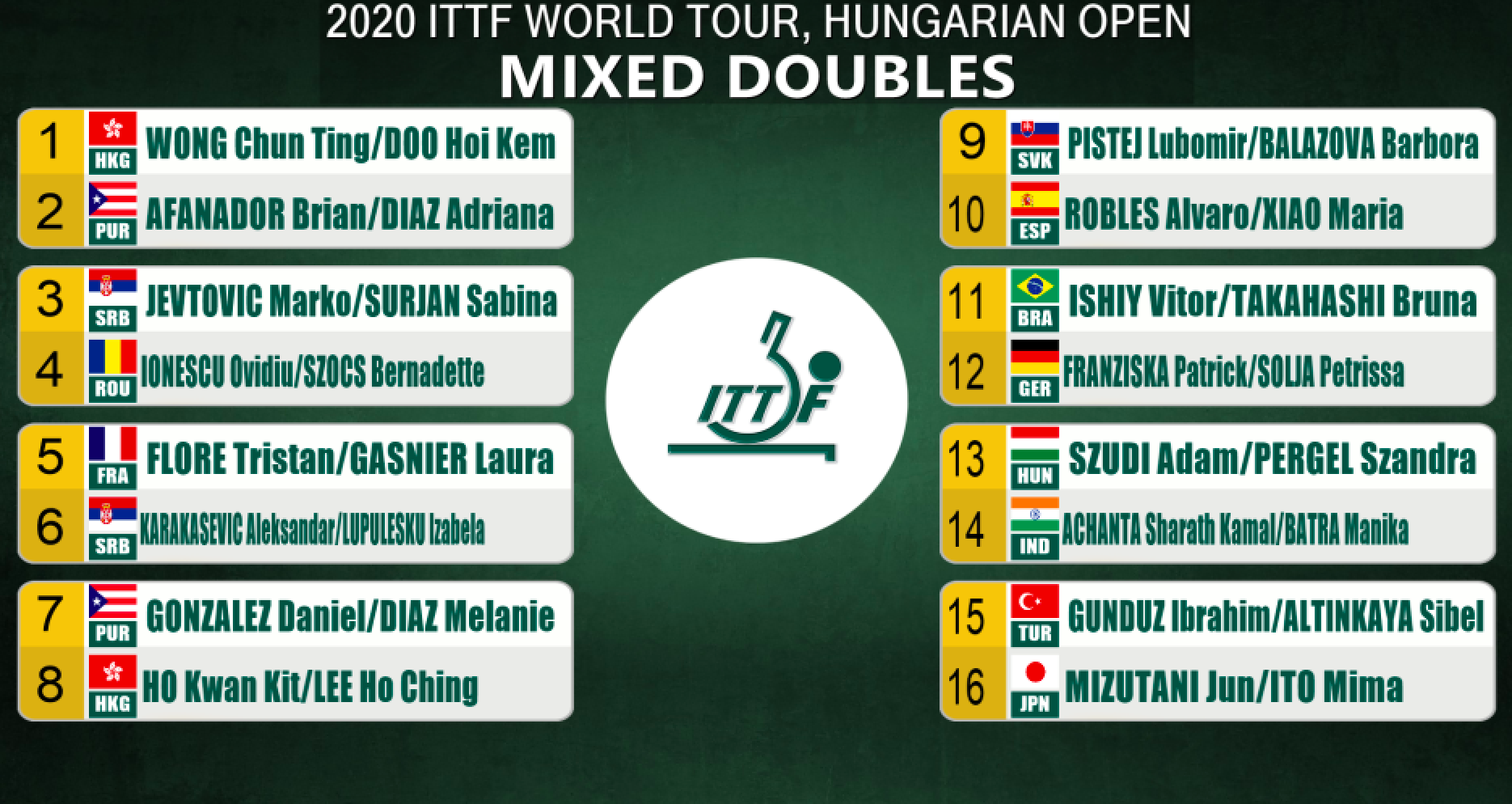