As the only Olympic champion in the field,Â Laura AsadauskaiteÂ ofÂ LithuaniaÂ proved that class is permanent as she won her third Pentathlon World Cup Final gold medal and qualified for her fourth Olympic Games.

With a winning margin of 11 seconds over silver medallistÂ Elodie ClouvelÂ ofÂ FranceÂ and 28 seconds over bronze medallistÂ Annika SchleuÂ ofÂ Germany, Asadauskaite (LTU) sent a reminder that she remains the athlete to beat, even at the age of 35.

Now she will be able to map out her preparations for the return trip to Tokyo in July 2020, having joined the African champion, Haydy Morsy of Egypt, on the qualification list. It was another signature performance from one of pentathlon’s enduring greats, and a fitting outcome for the historic first official test event of the 2020 Olympic Games. 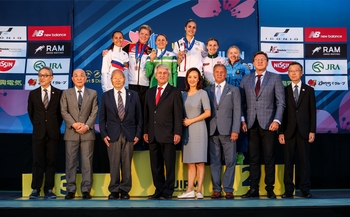 With only one Olympic place up for grabs, it was a fierce contest in humid conditions, with Asadauskaite (LTU) and Clouvel (FRA) swapping the lead throughout the various disciplines. Ultimately a slightly better performance in Fencing and Riding and the superior Laser Run speed of the London 2012 Olympic champion won out over the Swimming prowess and all-round consistency of the Rio 2016 silver medallist.

The home crowd, who had come out in numbers to watch this official Tokyo 2020 test event and cheer on the athletes fromÂ Japan, were left nursing a feeling of anti-climax asÂ Natsumi Tomonagafaded from 5th to 10th in the Laser Run.

Asadauskaite (LTU) said: “Today is a very happy day. I had a very good fence, a good ride and swim and also a good Laser Run. I’m very happy because I have the qualification for the Olympic Games. See you next year when I will come back here – l like this city very much.

“I think I am ready for the Olympic Games. Now I am ready.”

Clouvel (FRA) added: “It was very difficult in the Riding because my horse had a problem and was not the best. But I used my experience and tried to focus.

“After that it was difficult to concentrate in the Laser Run but I said ‘OK, Elodie, go for that ticket to the Olympic Games’, and I tried to focus on that, but Laura was the winner today. She is very fast and good with shooting, and she was the best today.

“I would like to say that the organisation has been very good and the complex is amazing, and I am confident about coming back to Tokyo for the Olympic Games.”

Schleu (GER) said:“In the beginning of the Laser Run it was pretty good, I moved up to 3rd place and I said ‘OK, it’s easy to hold it’ but my shooting was not on point. That made it pretty hard on the last lap and there were some very tough girls chasing me.

“The conditions were difficult – it’s not the heat, it’s the humidity – and we were sweating all the way through the Riding and the Laser Run.

“We all have to qualify for the Olympic Games – it’s only Laura who has qualified today – but I think we will have many chances to get to Tokyo.” 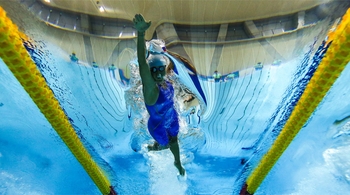 Gubaydullina (RUS) and Clouvel (FRA) engaged in their now-familiar shoot-out in the pool, timing 2:09.92 and 2:10.12 respectively. Another perennial contender, 2016 world championÂ Sarolta KovacsÂ ofÂ Hungary, was next-fastest with 2:10.93. 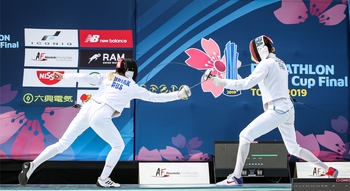 To mirror the Olympic Games format, the Fencing Ranking Round was held on the first day of competition, in this case Thursday 27 June. It was a riveting affair and Asadauskaite (LTU) came out on top, scoring 27V/8D, one more hit than Clouvel (FRA) andÂ Anna Buriak(RUS) could manage.

The Bonus Round saw an amazing surge from Schleu (GER), who eased the pain of her disappointing 18V/17D with seven victories on the showpiece piste.Tamara AlekszejevÂ (HUN) added three points of her own and Clouvel (FRA) was the last woman standing with three wins for a useful four additional points. 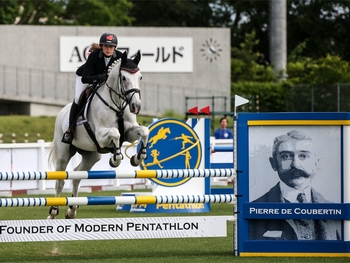 With the humidity rising, six athletes kept their composure and kept their horses under control to achieve a perfect round: Gubaydullina (RUS), Tomonaga (JPN), Schleu and Janine Kohlmann GER), Venckauskaite (LTU) and Oteiza (FRA).

Asadauskaite (LTU) kept her victory charge on track with only one knockdown for a score of 293, but Clouvel (FRA) struggled and was relieved in the end to only conceded 18 penalty points.

The result of that ordeal for Clouvel (FRA) was reduction in her lead to just 3sec over Oteiza (FRA) and 9sec over Asadauskaite (LTU).

Everyone in pentathlon knows that if Asadauskaite (LTU) is anywhere near the business end of a Laser Run, there is a good chance she will be the one to break the tape. 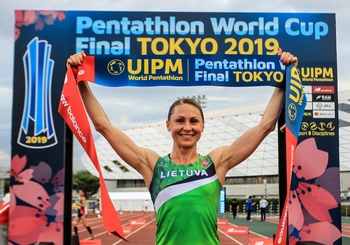 So it proved as the 2012 and 2015 World Cup Final winner immediately ran past Oteiza (FRA) on the first lap and caught up with Clouvel (FRA) by the time they arrived back at the range. She hit her five targets and moved into the lead, and apart from a wobble during her fourth shoot, looked as composed as ever in the pursuit of victory.

To her credit, Clouvel (FRA) refused to let anyone else have a sight of second place, and when Oteiza (FRA) faded there was a gripping battle for bronze, ultimately controlled by the composed Schleu (GER).

The best time of the day went to Venckauskaite (LTU), who surged round the course in 11:32.20 to come within 1sec of a bronze medal. Gubaydullina (RUS), the 2017 world champion, timed 11:43.10 whileÂ Ilke OzyukselÂ ofÂ TurkeyÂ made progress from the back of the pack in also breaking the 12min mark.

UIPM President Dr Klaus Schormann said: “It is important to underline that MP is the first Olympic sport to have a test event here in Tokyo. The result today with the Olympic champion from London 2012 winning has underlined the high level that our athletes are able to maintain over many years. We are seeing high performances from many of our best athletes in preparation for Tokyo.

“Special thanks go to the organising committee, where Tokyo 2020 has prepared with the Modern Pentathlon Association of Japan in a fantastic way. We have never seen such close to attention to the infrastructure and what is needed for the Games. We were happy to see the high level of the horses, which were prepared by the expert Olaf Petersen, and the excellent parkour.

“Congratulations to all the athletes for the places they have achieved, especially to Laura who has qualified for the Olympic Games, and we are looking forward to the men’s event and the Mixed Relay.

“We can already say that next year we are going to have the perfect Olympic Games.”

The Mixed Relay concludes the competition on Sunday, June 30.

The Pentathlon World Cup Final is being televised live or ‘as live’ in 143 countries, with a total of 90 hours of coverage secured by TV networks. This amounts to a total potential reach of 409 million.