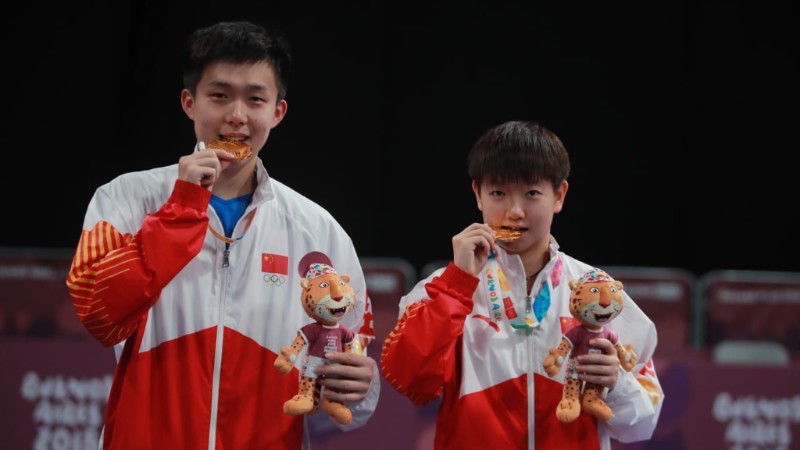 Â
The Women’s Singles Gold medal match saw a fierce battle between reigning World Junior Champion SUN Yingsha (CHN) & 2016 ITTF Women’s World Cup Champion Miu HIRANO (JPN). Both determined for Gold, the duo engaged in a fiery exchange of shots that thrilled the capacity crowd at the table tennis venue in the TecnĂłpolis. It was SUN who prevailed eventually in 5 games duel, winning the match 4-1 (13-11, 9-11, 11-9, 11-9, 11-6) by narrow margins.
Â
The 17-year-old shared “Of course it feels great to win Gold here at the Youth Olympic Games! Hirano is one of the top players in Japan, a World Cup Champion andÂ hasÂ beatenÂ three of our top Chinese players at the Asian Championships last year, so before this match, I couldn’t leave anything to chances, I had to prepare myself in the mindset of a challenger in the match and fight for every point, and I’m glad I made it.”
Â
In the Men’s Singles final, WANG Chuqin (CHN) was eager to repeat the earlier success of his compatriot SUN.
Â
The 18-year-old was all pumped up to challengeÂ top seeded Tomokazu HARIMOTO (JPN), starting strong to take a 2-1 lead after a dominant 11-1 win in the third game. Despite HARIMOTO’s efforts to recover and attempts to make a comeback, WANG gave no chanceÂ to the 2016 World Junior Champion, finishing the match 4-1 (11-8, 5-11, 11-1, 13-11, 11-9) to secure the Gold.
Â
WANG stated after his victory “I'm happy that I could win the title, it’s definitely a boost to my confidence, and by far the most important victory in my career. Harimoto’s skills and world ranking are very high andÂ is a very strong player, so I came into the match with the mindset to learn.”
Â
13th seeded Andreea DRAGOMAN (ROU) made history in Buenos Aires by taking home Romania’s first ever Olympic table tennis medal & Europe’s first Youth Olympic Games women’s table tennis medal. She defeated India’s Archana Girish KAMATH 4-1 (8-11, 13-11, 11-9, 11-5, 11-9) to secure the Women’s Singles Bronze medal.

With the conclusion of the Men’s & Women’s Singles events, the 64 young table tennis stars will get their chance to meet their Athlete Role Models, 2004 Olympic Champion RYUÂ Seungmin (KOR) & Olympian Galia DVORAK (ESP) on the Focus Day tomorrow, 11 October, before competition resume on 12 October with the Mixed Teams event until the Champions are crowned on 15 October 2018.