The two-lap swim in Rolava Lake saw the field well spread out early on, Britain’sÂ Lucy HallÂ once again pushing the pace out front along with Netherlands’Â Rani Skrabanja. Hall managed to establish a useful 25-second lead over the pack as she headed into T1, with number one Frintova heading onto her bike right alongside Germany’sÂ Laura Lindemann. 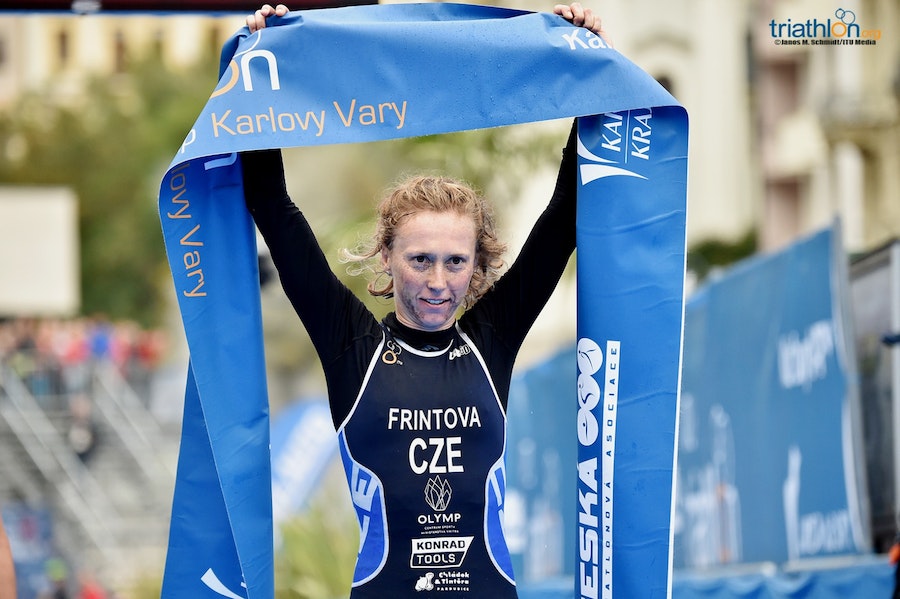 Proceeding out past the lake and onto the roads for the straightforward 6.5km approach to the city, Hall was then able to extend that lead and found herself almost 40 seconds ahead of the chase pack of twelve that had gathered behind as the tricky town section came into play.

Riding solo appeared to allow the Brit to focus even more keenly on finding her line as the gap grew to 52 seconds, while the likes ofÂ Edda HannesdottirÂ (ISL) andÂ Jessica Broderick’s (USA) races ended early as the athletes had to battle to stay upright through the twists and turns of some quick downhill sections.

Unable to relax for a moment of that solo ride, the effort took its toll on Hall and by the final 2km, the group was able to shut down the gap and were well within sight of the leader as they entered T2. It wasn’t long before she had been caught and an ice-cool Frintova took to the front along with Knapp, Kivioja and Mazzetti.

Knapp then fell off the pace, leaving the lead trio to decide the outcome. It looked impossible to call even with 200m left, but as the athletes approached the chute it was Frintova who accelerated away, taking the tape narrowly ahead of a delighted Kivioja, Mazzetti in third. Anja Knapp held off Switzerland’sÂ Julie DerronÂ as they earned fourth and fifth respectively.

“The weather made it hard out there and it was a very technical race so i’m super happy to win here on a home course,” said Frintova afterwards. “I hate the cold but I was ready for it, the bike leg was crucial and on the run I was pretty confident. I wasn’t in as good shape as I was here last year, so that makes the win even better.”

“Today was tough and I tried to be really careful on the bike,” added Kivioja. “I was pleased with my run but Vendula had the crowd behind her. My first World Cup podium feels great though - the tougher the course the better for me.”

“I haven’t done an Olympic-distance race since October, but i’m back on the podium for the first time in five years so I’m happy with that! I got sick in April and this was my first real race back and I thought I was able to manage the course well,” said a delighted Mazzetti.