In the build-up to the 2018 ITU Cagliari World Cup, all the talk was of a tough and technical course, a steep climb and a rapid descent that was likely to take its toll on the athletes. By the end of Saturday’s racing, it had become clear that it is on precisely these kinds of demanding courses that they love to compete and put all their training to the test. 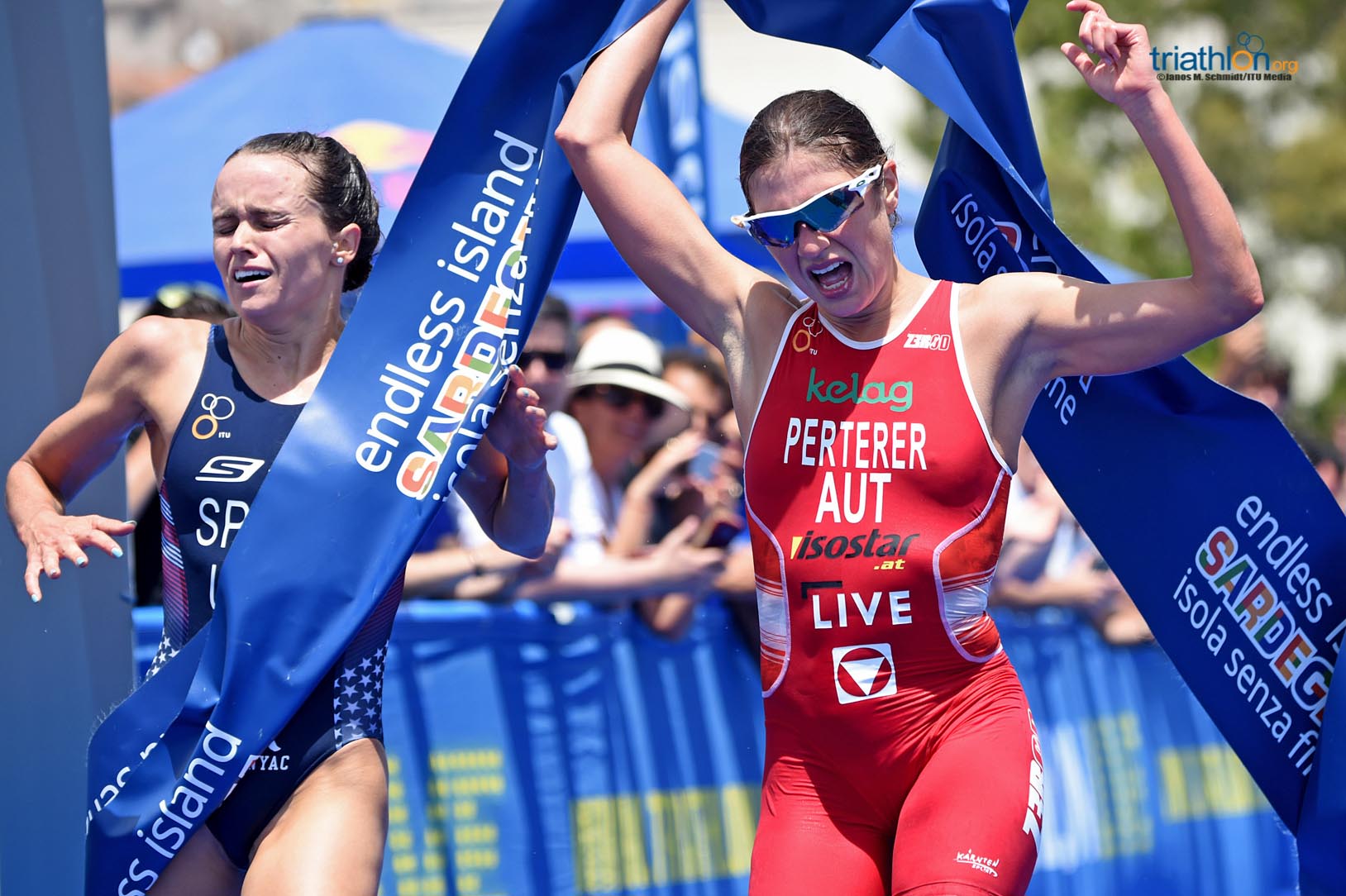 The women’s race saw the kind of close finish that seems unthinkable after such a gruelling hour under the Italian sun, but it was Austria’sÂ Lisa PertererÂ who caught AmericanÂ Taylor SpiveyÂ right on the line to win her first ever World Cup gold in the most dramatic of fashions, swiftly followed by Britain’sÂ India Leein third. “I didn’t know what I was thinking at the end,” said a delighted Perterer afterwards, “but I just kept telling myself; you can do this.”

The men’s race then sawÂ Delian StateffÂ andÂ Davide UccellariÂ come home in first and third respectively, New Zealand’sÂ Hayden WildeÂ the only man who could keep up with the flying Italians as the home crowd roared the duo down the finish.

Women’s race
The women’s podium looked wide open from the minute Britain’sÂ Lucy HallÂ and Japan’sÂ Fuka Segaemerged from T1 with a solid advantage, only to be quickly caught up by the likes of USA’s Taylor Spivey andÂ Chelsea Burns, Australia’sÂ Emma JeffcoatÂ and ItalianÂ Alice Betto.

The bike then fell into a comfortable pattern for the ten-strong lead group, who worked together on each of the five long climbs up the Viale Regina Margherita before dropping down for a winding descent that left mind and body little time for recuperation.

Even by the fifth and final ascent the leaders were looking composed, leaving the chasing pack ofÂ Sandra DodetÂ andÂ Vendula FrintovaÂ blowing harder in a vain hope of closing ground on them.

It all changed through the second transition asÂ Verena SteinhauserÂ began to force the pace with the Italian crowd powering her on and only Perterer, Lee and Spivey still had enough to go with her.

As the rest of the field became drained by the chase, the four leaders summoned the will for an almighty final 400m. Spivey was first to make the charge, only for Perterer to dig deeper still, breaking the tape first by a fraction of a second to record a spellbinding debut World Cup win.

“My season started badly and I almost lost my self-confidence, but training has gone well and I hoped I’d finally have a good race so to finish on the top makes me very happy”, said Perterer afterwards. “I love the heat, I love hills, and these were perfect conditions so I did what I had to do. I almost lost the group with 500 metres to go, but I know I can sprint well so I tried to trust in that and it was a crazy feeling to cross the line in first.”

“We pushed the most power up the hill and the rest of the bike course was really just recovery for the next hill,” said USA’s Taylor Spivey. “I tried to stay relaxed on the run and picked off some of the girls on the first lap. The final stretch was really exciting with four of us coming into the tape. Maybe I let go a little too soon, but i’m really proud of Lisa.”