he town of Tiszaujvaros, north-east Hungary, was once again consumed by triathlon fever this weekend as two days of elite racing provided the focal point of the annual festival of sport and culture. For 22 years, Tiszy has been a staple on the ITU World Cup circuit, but for the first time in its history, this year the men’s race had to be abandoned after a freak storm saw hail and high winds leave conditions hazardous for the athletes and spectators. “The priority for us in any event is the athlete’s safety, and the extreme weather conditions in Tiszy this afternoon made it impossible to carry on with the men’s race. We had hailstorms, thunders, lightning and the wind was blowing up the barriers, so we decided to cancel the race”, said John Petrides, ITU Technical Delegate. 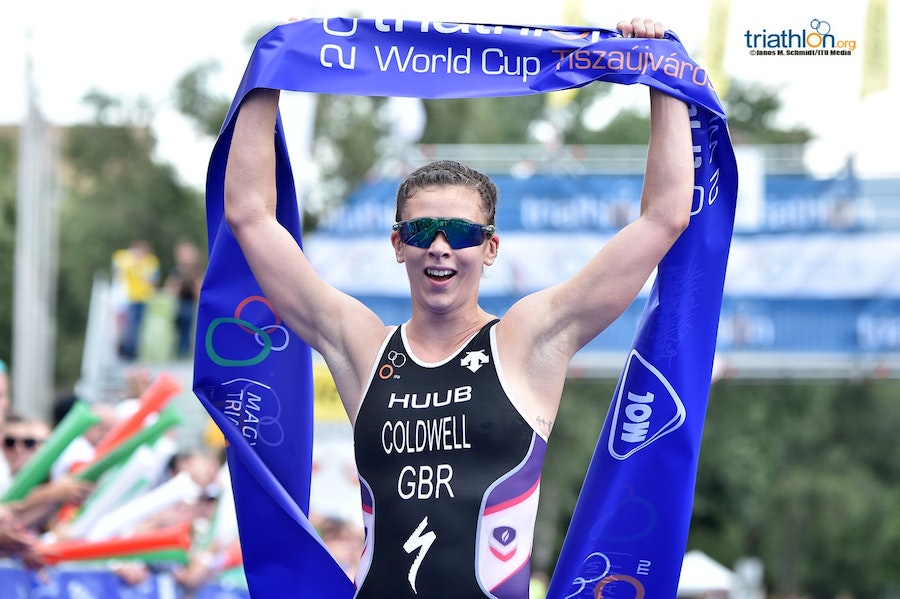 That was after Britain’sÂ Sophie ColdwellÂ had delivered an imperious display in the women’s race to earn gold in the very city she won seven years ago as a Junior. Coldwell dominated the run to finish 16 seconds ahead of Portugal’sÂ Melanie Santos, who scored her first ever World Cup podium. USA’sÂ Chelsea BurnsÂ came home in third.Â

With a large lead group of cyclists battling incredible weather conditions, the men’s race was cut short as the storm that blew in just after the athletes emerged from the water intensified. As the winds grew stronger, heavy rain gave way to hailstones, and as sections of the course became flooded the race referee took the decision to abandon the race for the safety of the athletes and the spectators alike.

Women’s race review
After a very well-executed and comfortable semi-final, Australia’sÂ Emma JeffcoatÂ looked like the woman to beat on Sunday, but Coldwell also exuded confidence alongside Santos and USA’sÂ Taylor KnibbÂ in their semi.

The Hungarian duo ofÂ Zsofia KovacsÂ andÂ Zsanett BragmayerÂ were equally focussed on securing their first-ever podium finishes on home soil, and as the swimmers found their rhythm and the field began to spread, it was Bragmayer who was able to assume the early lead and emerge first from the water.

Taylor Knibb had found herself a little way back in the traffic, but was typically unfazed as she and teammate Chelsea Burns soon made up lost ground and merged into a lead pack of 15 riders that also included Italy’sÂ Ilaria ZaneÂ andÂ Sara SalaÂ of Spain.

With strong cyclists like Australia’s Jeffcoat andÂ Tamsyn Moana-Veale, France’sÂ Margot GarabedianÂ and Britain’sÂ India LeeÂ also in the front runners, as each of the eight laps ticked by their lead grew, and by the bell it was a positively unassailable 75 seconds.

Through the second transition, Taylor Knibb struggled a little with her bike and it was Santos and Coldwell with Burns and Spain’sÂ Ana Godoy-ContrerasÂ who were able to assert themselves on the four-lap run.

Indeed, once Coldwell decided to make her move with two laps to go, there was nobody who could keep pace. As the Spaniard fell away, Santos found herself alone in second and Burns managed to hold off a late burst from Emma Jeffcoat to ensure her first podium since Huelva last year. Bragmayer was the highest-placed Hungarian in 10th, while Poland’s talented Roksana Slupek, winner of the second semi-final, finished in 15th.