Topping the Russian Federation and Italy,Â Simone BilesÂ led the U.S. women to their fifth consecutive world team title Tuesday as the first medals were awarded at the 2019 Artistic Gymnastics World Championships in Stuttgart (GER). 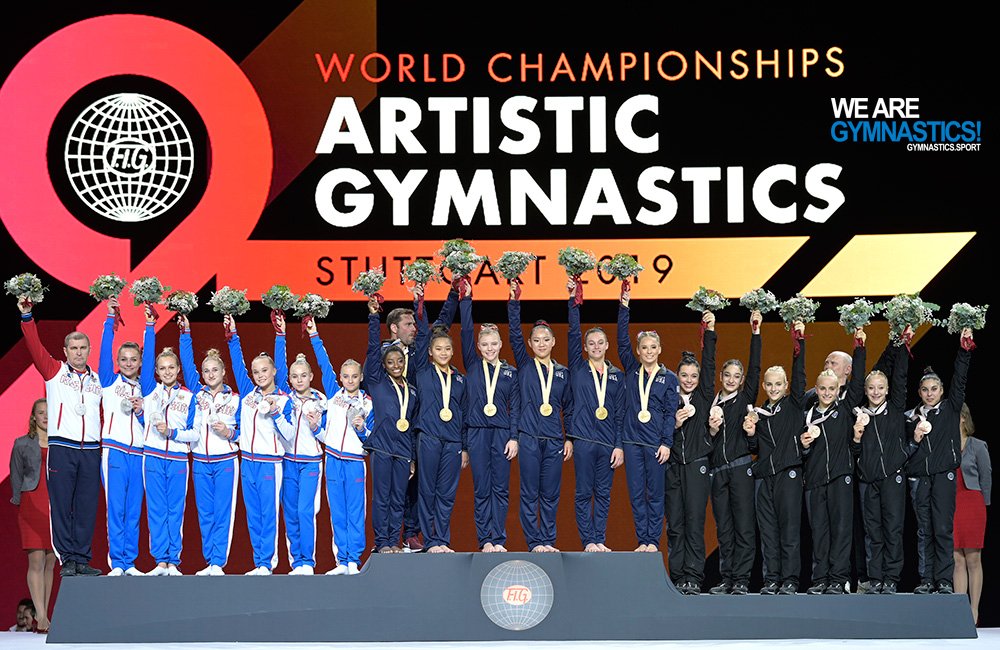 The top eight teams from qualification — the U.S., People's Republic of China, Russian Federation, France, Canada, Netherlands, Great Britain, and Italy — advanced to the team final at Hanns-Martin-Schleyer Hall. In the team final, three gymnasts per country competed on each apparatus with all scores counting toward the team total.

US women cruise to victory

The U.S. women bested runner-up Russia by nearly 6 points, with Biles competing all four events. The Olympic champion scored more than 0.3 higher than she had in qualification in Stuttgart. She posted the two highest scores of the competition with 15.400 on Vault in the first rotation (Cheng with a small hop) and 15.333 on Floor Exercise, where she perfectly executed her new tumbling pass, the triple-twisting double tuck.

The U.S. earned the highest team total on Vault, Balance Beam, and Floor Exercise. A fall fromÂ Grace McCallumÂ on Uneven Bars in the second rotation dropped the U.S. behind Russia on that event. First-year seniorÂ Sunisa LeeÂ contributed the team's top score on Uneven Bars with a beautiful routine that included a Nabiyeva (toe-on layout Tkatchev) and Bhardwaj. Lee dropped off Beam in the third rotation on her two-foot layout but the U.S. still outscored the field on the event. Both Biles andÂ Kara EakerÂ earned 14.000 or higher.

Jade Carey had the second-best scores of the afternoon on Vault (Cheng) and Floor Exercise, though she went out of bounds twice.

It is the fifth consecutive title for the U.S. women since 2011 and seventh title overall since 2003.

"I feel like every year it feels better and better, just because we're adding to the legacy," she said. "It's just so surreal to come out here and end up on top with the strength of the team that we have, even after having a couple of falls out there."

The medals, designed and produced in the local region, contain lights that illuminated them, delighting the gymnasts.

"We've never had a medal like this ever before, and I have a lot of medals so that's pretty cool," she said.

Silver medallists in 2018 and at the 2016 Olympic Games, the Russians retained its familiar place behind their U.S. rivals. 2016 OlympianÂ Angelina MelnikovaÂ performed consistently on all four events to pace her team. Former world championÂ Daria SpiridonovaÂ contributed the top score of the day for her team with her 14.766 on Uneven Bars.

Like the U.S., the Russians hit 10 of 12 routines, suffering falls fromÂ Anastasia AgafonovaÂ andÂ Lilia AkhaimovaÂ on Balance Beam in the second rotation. The team trailed Italy going into the final rotation, but three solid vaults, including a layout Rudi from Akhaimova that brought 14.733, were enough for silver.

"We are happy that we have taken second place today," said a smiling Melnikova after the competition. "It's still quite difficult to compete with the Americans and beat them but we can see that the distance between the two teams is much smaller than it was in the past."

Just eighth in qualification, an inspired Italian team turned in the most consistent performance of the day to win bronze, nearly 70 years after their only world team medal, bronze at the 1950 World Championships in Basel (SUI).

A quartet of first-year seniors —Â Giorgia Villa, twinsÂ AliceÂ andÂ Asia D'Amato, andÂ Elisa IorioÂ — all competing in their first world championships made up the core of the Italian team, contributing 11 of the team's 12 routines.Â Desiree Carofiglio, 19, performed on Floor Exercise.

While their rivals succumbed to the pressure, the Italians moved from event to event with hit performances. Villa, a triple gold medallist at the 2018 Youth Olympic Games, competed like a steely veteran, saving a handstand on Uneven Bars after a pirouette nearly went awry.

"Since we only qualified in the last place, we didn't feel any expectations at all going into the final," Villa said. "But we knew we could do better. We only wanted to do better than we had in qualification. And everything worked out."

The lead-off gymnast for Italy on Balance Beam in the final rotation, Villa landed the tricky round off, tucked full twist she fell on in qualification. Iorio had Italy's only fall of the day, on the final routine of the competition. Her Beam score dropped Italy behind Russia in the standings, but it was still enough to win bronze.

Villa said they thought the fall would cost them a medal.

"Routine after routine, our score was getting closer to the podium," she said, "When Elisa fell, we thought we had lost the medal and would be fourth, but we won the bronze, so we're very happy!"

Second to the U.S. in qualification, the People's Republic of China was unable to defend its team bronze from 2018 after major mistakes routines from its most experienced gymnast,Â Liu Tingting. Liu fell twice from Uneven Bars in the second rotation, coming off the bar both times on her elgrip pirouettes. She dropped off Balance Beam, where she is the defending world champion. The team finished just over half a point behind Italy.

The French squad, which had rallied to fourth place in qualification with an outstanding performance, suffered two falls from first-year seniorÂ Claire PontlevoyÂ on Uneven Bars and a fall on Balance Beam fromÂ Melanie de Jesus dos Santos, dashing any hopes of a medal. The team finished in fifth, just over a point away from the bronze medal.

Great Britain, Canada, and the Netherlands rounded out the teams in the final, all committing too many mistakes to be in contention of a podium finish.